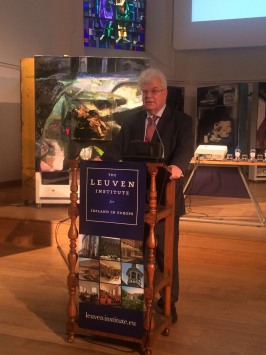 It is a pleasure and a distinct privilege to address this esteemed audience here at the Leuven Institute for Ireland tonight. Who could have imagined a Russian diplomat speaking to a predominantly Irish audience in Belgium? And yet such opportunities are exactly what we need to maximize the benefits of globalization and ensure the political unity of Europe from Dunmore Head in Ireland to Vladivostok in Russia.

Standing before you today in Leuven, the erstwhile alma mater of Erasmus and Mercator, one cannot help but be reminded that “mistakes are the portals of discovery”. This immortal line belongs to the fabled Irish writer James Joyce. Yet it also charts the way forward in Russia-EU relations – from errors made in the past, to a more balanced and pragmatic relationship in the years and decades to come.

Since the turn of the 1990s Russia has invested considerable political effort in building a mutually advantageous and forward-oriented partnership with the European Union. Events showed that we were generally on the right track. Our trade volume skyrocketed, creating hundreds of thousands of jobs across Europe. Suffice to say that just a few years ago we were trading around one billion Euros a day. A prolific process of mutual cultural and social enrichment was taking hold with cross-border travel by Russian and EU citizens setting new records. At the same time, being close neighbours, Russia and the EU were engaged in jointly tackling issues like terrorism and migration, resolution of regional crises and conflicts.

All this was perfectly natural. Russia was and will always be not just part, but one of the pillars of European civilization, not simply by arbitrary jest of geography, but through myriads of strands of culture, language, religion and ethos. Think back to the early 18th century, when Tsar Peter the Great embarked upon the daunting task of opening a “window to Europe”, travelling incognito across Europe to acquire foreign specialists and modern knowledge. In this endeavour he was assisted, among a selected few, by no other than a certain Peter Lacy, born Pierce Edmond de Lacy in Killeedy, near Limerick to a noble Irish family. Count Lacy would later become one of the most formidable Russian imperial commanders, fighting Swedes at Poltava as well as Turks in Crimea. His life is but one element in a mosaic of ties between Russia and the rest of Europe, which we hoped to draw on in forging a partnership of equals with the European Union.

The Ukraine crisis has severely tested those hopes. The blunt determination with which the EU pushed through its Association Agreement with Ukraine, refusing to listen to legitimate concerns of others and stopping at nothing to get its way, including de facto support of a coup d’etat in February 2014, undoubtedly changed Russian public opinion regarding European integration. Before the crisis the EU had been mostly regarded, unlike NATO, as a benevolent and cooperative integration project. Not any longer. The Ukraine crisis has hardened public perception about the EU. In some quarters the European Union is now openly considered as a “zero-sum” actor, vying for geopolitical gains at Russia’s expense, while masking its objectives with niceties about “strategic partnership” and “common neighbourhood”.

The ill-advised unilateral “sanctions” policies pursued by the EU, while failing to produce the desired political effect, have had an adverse impact on the trade and investment fabric of the Russia-EU relationship. For decades we had been painstakingly creating an “economic cushion” in terms of trade and investment, with which to insulate our ties from political fallout and residual stereotypes. This cushion has been badly dented – much to the detriment of EU countries’ economies that are still struggling to break the vicious circle of economic malaise, deflation and unemployment. According to the figures by an independent Austrian Institute for Economic Studies (WIFO), the sanctions are set to cost the EU as much as 100 bln. Euros and some 2 mln. jobs. As European entrepreneurs retreated from Russian markets, their place was quickly taken up by rivals from Asia, Latin America – and, as paradoxically as it may sound, even the US. Ireland as a country which used to belong to the top ten investors in the Russian economy with a total of 20 billion USD, including almost 7 billion in 2013 alone, was one of those badly scarred by the tension. There are reassuring signs that certain voices within the EU are beginning to speak out against sanctions, yet it is also true that much of the damage has already been done.

In my view, the EU has only itself to blame for these troublesome developments. Its European Neighbourhood Policy was conceived as a way to “establish an area of prosperity and good neighbourliness” in its Eastern and Southern periphery. Yet the prophesied “ring of friends” never materialized, and today the EU appears to be engulfed rather by a “ring of fire”. Certainly, the EU alone can hardly be blamed for the growing regional instability which has its objective reasons. Nevertheless, the ENP was not made any more attractive by the heavy-handed manner in which the EU sought to “civilize” the region and impose its own norms and standards there.

Unfortunately, the crisis has reinforced our view that the notion of “strategic partnership” with the EU turned out to be largely a slogan – shiny on the outside, yet hollow and insincere. It did not help things that EU decisions on so-called “sanctions” were motivated by significant pressure from Washington DC – something US Vice-President Joe Biden later openly admitted.

A return to “business as usual” is therefore difficult to imagine, given the circumstances. On this particular issue we fully share the view espoused by our EU colleagues. It will take years, possibly decades to repair the significant breach of trust that has occurred. Moreover, political momentum towards constructing an indivisible space of economic cooperation and human contacts from Lisbon (sorry, Dunmore Head) to Vladivostok needs to be reacquired through joint efforts.

The impossibility to return to “business as usual”, however, should not imply rejecting dialogue. Over the past several decades Russia and the EU have amassed a wide array of bilateral negotiating formats, ranging from summits held twice a year to over 40 expert-level sectoral and political consultative formats. By some accounts, the relationship with Russia was by far the most institutionalized among the EU’s so-called “strategic partnerships”. Yet today, most of these formats lie dormant at the initiative of the EU.

If “punishment” was the goal, then the EU certainly excelled in punishing itself. EU decisions to interrupt the normal pattern of dialogue, in our view, lacked logic and common sense. Suffice to mention that the first consultations on counter-terrorism between Russia and the EU since 2013 were held only on April 1st, in the wake of brutal attacks in Brussels. Yet my country is equipped with substantial expertise, sadly, earned at a heavy price, in terms of combating international terrorism. The same is true of other much needed formats, including those on freedom of movement and energy, environment and drug trafficking, agriculture and digital society. There are far too many links binding Russia and the EU together to be dispensed with under politicized pretexts.

We also have to keep a door open for normalizing the Russia-EU relationship on new, more pragmatic and mutually advantageous foundations. The provisions of our jointly agreed documents, including the 1994 Partnership and Cooperation Agreement, as well as the four 2005 Roadmaps on Common Spaces, point the way.

In our view, if the relationship is to reemerge as a partnership of equals, realities need to be taken into account. With each passing year Russia is becoming more integrated into the Eurasian Economic Union. As a result, the European economic order may increasingly be defined by interplay between the EEU and the European Union. We have proposed a long-term goal of establishing a free-trade area between those two bodies of integration and continue to believe that it should remain on the table. For a start, it would be expedient to set up initial working contacts between the European and the Eurasian Economic Commissions. It is welcoming that the EU is finally coming round to contemplating this idea. Such a move would enable both sides to address current trade and economic differences, as well as understand concerns related to EU association agreements with countries of the “Eastern Partnership”. The next logical step would be to commence dialogue on harmonizing technical regulation systems and lowering non-tariff barriers. Normative convergence should be a logical consequence of this process.

Secondly, we should begin working in earnest to turn our common neighbourhood into just that – a shared area of security and prosperity.

We sincerely regret that in drafting the restyled version of the European Neighbourhood Policy late last year the EU institutions missed another chance and chose to avoid substantive dialogue with Russia on ways of harmonizing cooperation with the EU in our common neighbourhood. Our view is clear. The region must not be allowed to turn into new “borderlands” – or, God forbid, a chain of “frontline states” – inside Europe, fuelling confrontation and cementing new dividing lines across our continent. It is in our joint interest to ensure that Georgia, Moldova, Ukraine and others become militarily-neutral, politically stable and economically prosperous states. It is time to stop ignoring genuine, even if diverse, interests of these societies as well as their unique historical, cultural, linguistic, economic and geographic traits. Our common task is to shape these countries as bridges inside Europe, conduits that would organically unite Russia and EU Member States into a single economic whole, rather than turn them into a new cordon sanitaire. If we are to achieve this noble task, it will be a European achievement on par with the Franco-German reconciliation, a feat that will truly be worthy of the notion of Russia-EU strategic partnership.

Last, but not least. We should not forget the turbulent times that Russia and EU Member States live in. The on-going transition from a bipolar to a multipolar world is still far from complete. Growing connectivity and interdependence are matched by mounting insecurity. Transnational threats to our citizens, economies and critical infrastructure have mushroomed. For these reasons, if nothing else, it should be in Russia’s and EU’s common interest in creating an effective system of regional and international governance. There is no doubt that we are up to the challenge. This is evident from the score of Russia-EU success stories in the field, including fighting piracy off the coast of Somalia and, as of late, the elaboration of the Joint Comprehensive Action Plan on resolving international concerns with regard to the Iranian nuclear programme. The on-going work within the EU to enact a new Global Strategy provides a welcome opportunity for synchronizing Russia-EU interaction in countering existential threats like global terrorism or climate change, while balancing legitimate national interests.

“He who keeps his tongue, keeps his friends”, the Irish say wisely. Allow me to conclude on this note by once again reaffirming our desire to transcend the current phase of uncertainty in relations with the European Union. As neighbours we are bound together by common destiny, and common responsibility for the fate of our continent. It is up to us to shape it in a future-oriented and result-driven fashion, rather than continue staring back into the past.