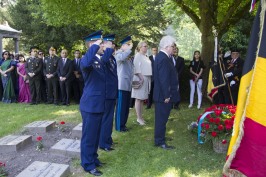 On 9 May Permanent Representative of Russia to the EU Ambassador Vladimir Chizhov and staff of the Mission with their family members participated in a solemn ceremony of laying wreaths and flowers at the Memorial and tombs of Soviet soldiers who died liberating Belgium from the Nazis and were buried at the Brussels cemetery in Evere and the Memorial to the Members of the Belgian Resistance. This event has traditionally been a key element in a range of events that are being held by Russian diplomatic missions and NGOs of Russian compatriots in Belgium in the framework of celebrations of Victory in the Great Patriotic War of 1941-1945. Heads and staff of diplomatic missions of CIS countries as well as US, France, other EU, Latin America, Asia and Africa states took part in the ceremony.