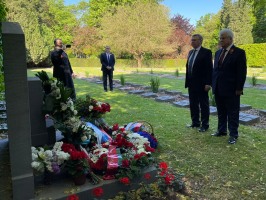 On Victory Day, tribute was paid in Brussels to the memory of Soviet citizens who had fallen in the fight against Nazism.

On 9 May 2022 wreaths were laid at the communal cemetery in Evere at the memorials of Soviet citizens who had died in the struggle to liberate the country and of members of the Belgian Resistance.

Permanent Representative of Russia to the EU Ambassador Vladimir Chizhov, Ambassador of Russia to Belgium Alexander Tokovinin, members of Russian missions, Archbishop Simon of Brussels and Belgium, as well as Chargé d'affaires a.i. of Belarus Ekaterina Shatokhina took part in the ceremony.

Representatives of other CIS diplomatic missions also laid flowers at the memorials.