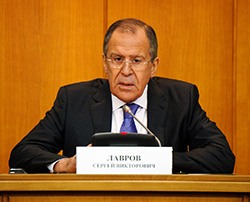 Question: Can you comment on the regular media reports about modern weapons making it into the hands of terrorist groups in the Middle East and North Africa?

Sergey Lavrov: Apparently, our Western colleagues have yet to fully realise the implications of their recent military operations in the Middle East and Africa. They believed they would destroy the Saddam Hussein and Muammar Gaddafi regimes, and that democracy would instantly prevail in Iraq and Libya. Instead, these nations are now torn by chaos. Abandoned military depots and arsenals were looted. All weapons, including MANPADS, and hundreds of tonnes of ammunition, went missing. Now, those countries are shattered by fratricidal wars with no end in sight. Unfortunately, this situation was quite predictable, and the President repeatedly warned about it.

In Libya alone, at least 500 Strela and Igla MANPADS went missing. The first bell rang in Mali, where, in 2012, militants shot down a government Mig-21 using a MANPAD. No one knows which terrorist groups may have got their hands on these weapons, which are most dangerous for civil aviation. Is it ISIS, Jabhat al-Nusra, or Al-Qaeda? No one knows when and where these weapons will be used next, either. It’s unlikely that anyone in Iraq, with hundreds of thousands of casualties and millions now living in a country torn by civil war, experienced any relief from learning that the British have found out that then Prime Minister Tony Blair actually deceived the parliament by pushing through a resolution to have the British Army participate in the invasion of Iraq alongside the United States.

Of course, the consequences could have been even more devastating, if three years ago Russia had failed to prevent the US attack on Syria, having persuaded al-Assad to get rid of Syria’s chemical weapons. Even the thought of who may have ended up with MANPADS and other conventional weapons, as well as stocks of these weapons of mass destruction, is dreadful.