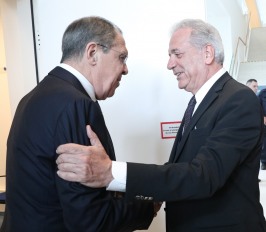 On 14 March 2019 Foreign Minister Sergey Lavrov met with the EU Commissioner for Migration, Home Affairs and Citizenship Dimitris Avramopoulos on the sidelines of the 62nd session of the UN Commission on Narcotic Drugs.

During the conversation, the officials discussed topical matters of cooperation between Russia and the European Union in the area of freedom, security, justice and the fight against drug trafficking. The Russian Foreign Minister noted that the resumption of full-fledged cooperation in the law enforcement sphere could make a significant contribution to improving relations between Moscow and the EU.

Mr Lavrov pointed out that the EU’s continued visa discrimination against the citizens of Crimea and Sevastopol was unacceptable and noted that it was important to create favourable conditions for the safe return of Syrian refugees to their home country.