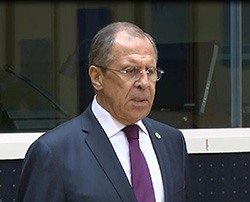 Question: What happened to Vitaly Churkin? Are there any grounds for thinking that his death was not accidental? Who will be the new Russian representative to the UN? Is Russia again facing the pro-American company at the Security Council alone?

And one more thing. It would be great if one of the streets currently under development in Moscow, for example, Passage 3843 in Cheryomushki, were named after Churkin, Churkin Street.

Sergey Lavrov: For nearly 11 years Vitaly Churkin was on the front line in foreign policy doing a brilliant job of upholding Russia’s interests. He invariably displayed high professional skills, an ability to achieve a maximum in the most difficult of situations and to win support for our approaches on the part of like-minded people. I need hardly say how stressful this job was, involving constant mental and physical strain, which affected his health.

President Vladimir Putin decorated Vitaly Churkin posthumously with the Order of Courage. Vitaly Churkin’s best qualities and his contribution to strengthening the authority of the United Nations were noted at the special UN General Assembly session on March 21.

The Foreign Ministry is doing all it can to perpetuate the memory of Vitaly Churkin. We are constantly receiving various proposals from the Russian public and from foreign countries. One proposal is to name the Moscow school where he studied after Churkin. Proposals are being considered to name streets or squares in various Russian cities after him. It has been proposed to establish a diplomatic award and a state decoration named after him and a Churkin scholarship for MGIMO students. Of course, this calls for the approval by Vitaly Churkin’s family and thorough coordination between various government agencies in which we are most actively involved.

Question: Why are we pressing for a settlement in the framework of the Minsk Agreements if Ukraine is flouting them? Is it not time for the Russian Federation to start designing an agenda for Ukraine and recognise the DPR and LPR rather than trying to guess what Donald Trump’s next step will be? Will Russia be able to annex the DPR and LNR in the near future?

Mr Lavrov, I constantly watch and read the news about Donbass and see what is going on there: people are being killed and houses destroyed. Why can’t we introduce our troops there?

Why can’t Russia coerce Ukraine into peace like it did with Georgia?

Sergey Lavrov: In seeking early implementation of the Minsk Agreements we assume that a long-term solution to the problems connected with the deep crisis that has hit Ukraine can only be found by political and diplomatic means. The Minsk Package of Measures of February 12, 2015 has been approved by the UN Security Council, which passed Resolution 2202 of February 17, 2015. We are convinced that there is no alternative to the Minsk Agreements today. The West thinks likewise.

The main provision of the Minsk Agreements is Kiev’s direct dialogue with Donetsk and Lugansk. Neither Russia, nor the new US President, nor anybody else can do for the parties to the conflict what is needed to achieve a settlement, and that is to agree with each other directly on mutual guarantees of security and the principles of building a common future.

Today it is obvious that the settlement process is marking time because of the stubborn reluctance of the Ukrainian leadership to fulfil its obligations under the Minsk Agreements. We will continue our efforts to get Kiev to lift the blockade of Donbass and start implementing the agreements fully. We expect a similar approach from the western states, which have repeatedly said that there is no alternative to the Minsk Agreements and that they need to be implemented as soon as possible.

Russia is a peaceful state. We have no territorial claims with regard to our neighbours. We want to be surrounded by successful and prosperous countries with which we could build partnership relations in a good-neighbour spirit. At the same time we will continue to bend our efforts to prevent the hotheads in Kiev from unleashing a new spiral of violence in the country’s southeast. In any case, we won’t leave the people of Donbass in the lurch.

Question: Apart from Ukraine, Japan is the only country making territorial claims against Russia.

Is Russia willing to transfer Shikotan and Habomai islands to Japan in keeping with the 1956 declaration after the conclusion of a peace treaty? Since the declaration was signed, 200-mile economic zones were introduced. Does this mean that new talks should be held on this issue? Japan is a US ally, and so there is no guarantee that US radar and missiles will not be deployed on these islands. What joint activities agreed to by Vladimir Putin and Shinzo Abe in December can actually be pursued on the islands to which Japan lays claim?

Sergey Lavrov: The October 19, 1956 Joint Declaration is a basic legal document that restored [diplomatic] relations between Russia and Japan following WWII. It was ratified by both parliaments and deposited with the UN as an international treaty. Last year, we marked 60 years since the declaration.

However, it is a fact that not all the provisions of that declaration could be implemented. Tokyo has refused to sign a peace treaty and has laid territorial claims to four islands. It is our firm position that during the talks on a peace treaty Japan must unambiguously recognise the results of WWII, which have constituted the basis of world order for over 70 years. It appears that Tokyo is not ready to do this.

We attach great value to the agreement reached by the leaders of Russia and Japan to launch talks between our deputy foreign ministers on joint economic activities on the southern Kuril Islands. The first round of these talks was held on March 18. The Russian Foreign Ministry, acting in close contact with other concerned Russian agencies, has been working to choose economically important projects whose implementation could promote the socioeconomic development of the southern Kuril Islands and could also benefit the population of the adjacent Russian and Japanese districts.

At the same time, the legal framework for these projects must not contradict Russian law. It is the fundamental principle for joint economic activities. We believe that it will help strengthen mutual trust between people in the Sakhalin Region and Hokkaido and the spirit of friendship and mutual understanding between our nations.