Russian MFA’s Commissioner for Human Rights, Democracy and the Rule of Law, Konstantin Dolgov has working contacts in Brussels 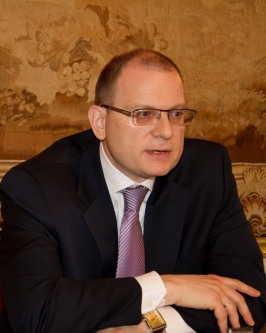 On 6 December Ambassador Konstantin Dolgov, Russian MFA’s Commissioner for Human Rights, Democracy and the Rule of Law held working consultations with Stavros Lambrinidis, EU Special Representative for Human Rights. During the consultations, as well as at a press conference for Russian and foreign media and a meeting with representatives of international human rights NGOs, the Russian MFA Report on the Human Rights Situation in the EU was presented in detail.

Based on the facts stated in the report, the Russian side drew attention to serious problems with respect of human rights and democratic standards in the EU, including surge in neo-Nazi and radical nationalist sentiments, as well as large-scale violations of rights of Russian-speaking minorities in the Baltic states. It was noted that these problems and inefficiency of EU institutions in resolving them do not allow the EU to pretend to be a “paragon of democracy”.

EU partners were called to establish constructive cooperation with a view to finding solutions to the current problems in the field of human rights on an equal footing, without politisation and double standards.

The parties agreed to continue regular contacts between the Russian MFA’s Commissioner and the EU Special Representative.