Russian Geographical Society announces a competition for the international Award 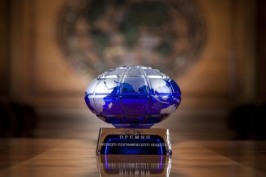 This year the Russian Geographical Society (RGS) will present its second international Award in the field of national geography, ecology, preservation and promotion of the natural, historical and cultural heritage. This Award was established in 2014 to be granted every other year.

Organisations and individuals from around the world may apply for the Award until 30 September 2016 by filling in the form directly on the RGS Internet site www.rgo.ru/en/award. Applications are accepted in five nominations: expeditions; scientific research; education and awareness; popularisation
of natural, historical and cultural heritage of Russia; and public recognition.
The jury made up of renowned scientists, as well as public and cultural figures will assess the nominated projects and establish the Award finalists.

We invite interested European organisations and individuals to participate in the competition for this Award. Further details related to the Award are available on the RGS Internet site www.rgo.ru/en/award.