Russian Foreign Minister Sergey Lavrov’s remarks at the opening of the historical and documentary exhibition, “Year 1939: The Outbreak of World War II” 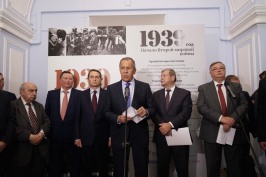 Today, we are opening an important historical and documentary exhibition dedicated to the outbreak of World War II. Unique archival documents are presented here, many of which come from the Foreign Ministry’s funds. I would like to express my sincere gratitude to the Federal Archival Agency, the Russian State Military Archives and the Russian Historical Society, all of which made this exhibition possible.

We are seeing increasing attempts to falsify the history of WWII. We just heard about this again in President Putin’s welcoming address. There are attempts to belittle or keep completely silent about the role of the Soviet Union in defeating Nazism, to whitewash the villains, to put executioners and their victims on the same level, and to question the outcome of the war and the verdicts of the Nuremberg Tribunal. The goal of such speculation is clear. It is not only to denigrate modern Russia as the successor of the Soviet Union, but also to cover up the unseemly role of their own states’ complicity with the Hitler regime, to justify the ugly excesses of neo-Nazis and an unscrupulous war on monuments to liberator soldiers.

This exhibition is important because it uses the elegant language of irrefutable facts to show who pushed the world toward calamity and who tried to prevent it. At a time when storm clouds were gathering over Europe, the Western capitals - in the hope of staying safe at the expense of others - made a selfish and an extremely short-sighted choice in favour of appeasing the Hitler regime. The Munich Agreement of 1938 was the apotheosis of this policy.

Paris and London – there’s documentary evidence of this - blocked our country's proposals to form a collective security system. Even in the spring and summer of 1939, when it became clear that conflict could not be avoided, the Western powers naively believed that the war would bypass them and played a double game trying to channel Hitler's aggression to the East. In 1938, immediately after the Munich Agreement had been signed, Anglo-German and Franco-German declarations were signed providing for the non-use of force. A similar document between Warsaw and Berlin was concluded back in 1934.

In these circumstances, the Soviet Union had to go it alone to ensure its national security and sign a non-aggression pact with Germany. This forced move made it possible to better prepare for the coming war with the aggressor. Today, it is worth reminding everyone that our country made a decisive contribution to defeating the Hitler war machine and liberating Europe and the world from Nazism. Had the efforts been joined in the pre-war period, the many victims could have been avoided.

As the great Russian historian Vasily Klyuchevsky said, history “punishes those who do not learn its lessons.” At a time when the international community is faced with dangerous challenges and threats, zero-sum geopolitical games, and especially attempts to establish global hegemony, are horrible and harmful. It is necessary to get back to the difficult work of creating an architecture of equal and indivisible security and broad cooperation of sovereign states in the Euro-Atlantic and Eurasia. Reliance on universally recognised principles and norms of international law is critical for success, which must be strictly observed by all participants of state-to-state relations without exception.

Guided by this philosophy, Russia will continue to work to improve the global situation and will contribute in every way to achieving political and diplomatic solutions to the numerous crises and conflicts in the world.

Thanks again to everyone who made this exhibition possible.