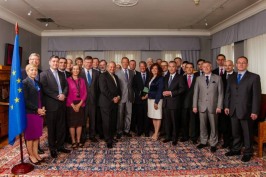 On 8 July Russian Minister of Foreign Affairs Sergey Lavrov held a traditional meeting with the Ambassadors of 28 EU Member States and Head of the EU Delegation to Russia.

Minister Lavrov shared his evaluation of the current state of the relations between Moscow and Brussels in the context of the outcome of the Russia-EU summit held last June and reaffirmed Russia’s commitment to developing a mutually beneficial, future-oriented strategic partnership with the EU. Minister draw the Ambassadors’ attention to the need to facilitate settlement of a number of practical issues in Russia-EU political and economic cooperation, including transition to a the visa-free regime, conclusion of the New Basic Agreement, harmonisation of approaches to further development of energy cooperation, and enhancing the framework for interaction in the peace-keeping, civil protection and military spheres.