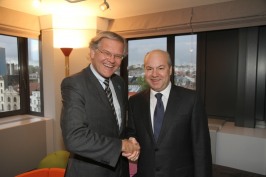 The discussions covered a wide range of issues related to implementation of the Russia-EU Roadmap on the Common Space of Freedom, Security and Justice, follow-up to the decisions of the Permanent Partnership Council (PPC) meeting in Kazan and preparation for the next PPC meeting in Brussels on November 18-19.

The Russian side drew attention to the draft agreement on waiver of visa requirements for nationals of the Russian Federation and the European Union member states submitted by President of the Russian Federation Dmitry Medvedev at the Russia-EU summit in Rostov-on-Don on June 1, as well as to the appeal by the Russian Ministers of Foreign Affairs Sergey Lavrov and of the Interior Rashid Nurgaliev to their colleagues from the European Union on the necessity to extend the facilitated local border traffic regime to all residents of the Russian Kaliningrad region (KR) travelling to Poland and to all residents of the relevant Polish territories travelling to KR.

The Parties expressed hope for success in upcoming negotiations on amendments to the existing Russia-EU visa facilitation agreement. They supported swift launch of a migration dialogue whose concept was submitted by the Russian side to its EU partners at the end of 2009.

In the context of pursuing closer cooperation of Russia and the EU actions on combating drugs Mr. V.Likhachev addressed his EU colleagues with a request for support the Russian “Rainbow 2” plan on countering the narcotic threat originating from Afghanistan, and noted the advisability of boosting cooperation in countering synthetic drugs.

The Parties supported the idea of enhancing Russia-EU judicial cooperation in civil and commercial matters. For this purpose Mr. V.Likhachev suggested to hold a series of seminars with the participation of experts from Russia, EU structures and EU Member States to converge the approaches of both sides. He also informed his colleagues of the state of play regarding Russia’s accession to the Hague conventions on private law.

The Parties expressed hope that the upcoming PPC meeting would allow to reach concrete arrangements for further establishment of the Common Space of Freedom, Security and Justice.