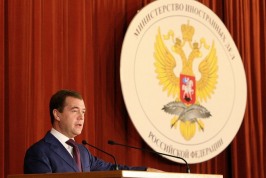 A meeting of ambassadors and permanent representatives of the Russian Federation took place at the Foreign Ministry premises on July 12-13. Its central point was President Dmitry Medvedev’s speech at the plenary session. He emphasized that the basic guidelines for the entire work of Russian diplomacy should be the long-term goal of modernizing the country and the effective realization of the potential of external sources for its innovative development.

In his speech and in a conversation with senior diplomats of the country, which was continued behind closed doors, the President of Russia emphasized the importance of full cooperation in the formation of a unifying global affairs agenda and of further work on the harmonization on this basis of relations with all partners. Medvedev set Russian diplomacy a number of specific tasks the solution of which should guarantee a strong international position of the country now and in the post-crisis stage of world development, and contribute to ensuring its reliable security, and the consistent promotion of national interests.

With the participation of senior officials from Russian ministries and departments an in-depth discussion took place on the prospects for the revitalization of the work of the Ministry of Foreign Affairs in key areas. Consideration was given to foreign economic problems, to questions like countering new challenges and threats and developing many-sided diplomacy and information activities of the Foreign Ministry, and regional foreign policy priorities were reviewed, with emphasis on the CIS space, the Euro-Atlantic area and the Asia-Pacific region. The talk was also about resource provision for the diplomatic service and the expansion of its tools and capabilities.