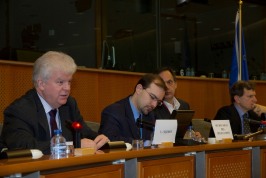 On 12 January 2012 Ambassador Vladimir Chizhov, Russian Permanent Representative to the EU, addressed a meeting of the European Parliament’s Delegation on relations with Russia.

He highlighted major results of the 28th Russia-EU summit held on 14 and 15 December 2011 in Brussels. The intervention was followed by an exchange of views. Ambassador Chizhov answered questions of members of the European Parliament.