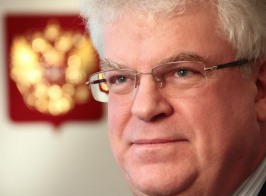 Article by Permanent Representative of the Russian Federation to the European Union Ambassador Vladimir Chizhov, 20 February 2016

Let me start by quoting the EU Trade and Investment Strategy approved by the EU Council on 27 November 2015: “The EU’s strategic interest remains to achieve closer economic ties with Russia. The prospects for this will, however, be determined primarily by the course of Russia’s domestic and foreign policy, which so far gives no signs of necessary changes. The developments within the Eurasian Economic Union also have to be reflected upon”. This is all that the European Commission can say at the moment regarding its trade strategy towards Russia. One can draw a logical conclusion: Russia is absent from the official economic strategy of the EU. In the meantime, though, the European Union seems to have its own view of what Russia’s domestic and foreign policy should be and how it should change – presumably, in EU’s own interests.

Meanwhile the Russia-EU trade is worth over 200, and more recently over 300 billion euros per year. One cannot ignore such an impressive figure, even for political reasons. I am absolutely sure that in spite of brevity of language of the above-mentioned Strategy, in reality the European Commission gives considerable thought to the future of our economic relations.

So, how do our trade links look at the moment? According to Eurostat data, the mutual turnover was at its maximum in 2012 – 338,5 billion euros. It started to contract in 2013 and fell to 284,6 billion euros in 2014. During 11 months of 2015 it fell additionally by more than 70 billion euros, or approximately by a third. As a result, today the trade volume has recoiled to its level of 6 to 7 years ago.

It is no secret that a significant part of our trade is accounted for by energy materials – mostly natural gas and oil. That is why the abrupt fall of world prices for oil and - as consequence - for gas produced a considerable impact. The lion’s share of the contraction of trade volumes - almost 35 billion euros last year, for example – belonged to energy trade.

But at the same time we witnessed a drastic downturn of EU exports to Russia which does not depend on oil prices. It fell during 2012-2014 by 20 billion euros in annual terms and again by almost a third last year. One can only conclude that the oil prices are only part of the story.

One should also take into consideration the fact that exports of non-fuel commodities from Russia to the EU suffered a much smaller contraction and in some cases even increased in 2015. I can assure you that our producers stay keen to continue trading with the EU.

No doubt, the fall of EU exports to considerable degree was caused by external factors, namely world economic recession and lower demand in Russia. But let’s face it: this was not the only reason, and perhaps not a decisive one. The situation visibly deteriorated after the EU introduced in 2014 unilateral economic restrictions against Russia. Russia responded by declaring a ban on a major part of agricultural imports. As a result EU agricultural exports to Russia during 10 months of last year fell by 40%. Russia embarked on a policy of import substitution and sought suppliers from third countries. According to the Commission’s estimates, as you well know, the initial damage for EU agriculture reached approximately 5 billion euros and continues to rise. Moreover, it is well known that the agricultural market is rather volatile: once you leave it, it becomes complicated to come back, and your niche rapidly gets filled by others.

The exports of technical goods from the EU have also gone down. During the same 10 months of last year they fell from 40,4 to 26,8 billion euros. It is really hard to attribute this only to weaker demand of Russian importers. There is evidence that EU companies have started feeling insecure about political and economic perspectives of trade with Russia, fearing to violate, possibly involuntarily, certain intricate aspects of the so-called sanctions, perhaps even not the EU ones but those imposed by the US. Mostly renowned, experienced partners have stayed, whose economic stakes in Russia were too high.

Summing up: deterioration of political climate has led to contraction of economic turnover at least as much as the world recession and the oil prices.

Let us now take a look at what happened in trade policy sphere.

Even before the EU introduced what we might call “material” sanctions it unilaterally froze all bilateral economic dialogues which had been established to facilitate progress towards a Common Russia-EU Economic Space – in accordance with the bilateral “Roadmap” adopted in 2005.

The only dialogues to be continued were on customs cooperation and in the science and technology field where the EU has the highest interest to interact with Russia. Now we can see a modest revival of interest on the part of the EU in the trade sphere in form of expert meetings on trade issues, the first of which took place last summer and the next one is planned in Moscow in March. The only thing is that we know pretty well that meetings of this kind are devoted to discussing mutual complaints rather than working out a positive agenda leading to an increase in trade and investments.

The EU has decided to freeze negotiations on a New Basic Agreement with Russia. It happened at the moment when the EU put forward a package of proposals containing measures to liberalise mutual market access and a number of trade mechanisms. As a consequence we missed an opportunity to ameliorate terms of trade. Who benefited? Our competitors, of course. There are many of them, in case you haven’t noticed.

In 2012 Russia acceded to the WTO. At present we already have within the WTO Dispute Settlement Body four cases against Russia put forward by the EU and three initiated by Russia. As representatives of the Commission recently admitted – one who lives in a house of glass should not throw stones. The idea is not new, but very relevant. Let me remind that it is happening against the background of the turnover of trade going down, so the spats, including at the WTO, are gradually losing sense.

During the last several years Russian producers have been increasingly complaining against EU antidumping practices. Those have become more ruthless and, they believe, less substantiated. The antidumping duties ranging from 12% to 70% are obviously many times higher than import tariffs of 3,5% to 4,0%. The Commission widely uses so-called “energy adjustments” which lead to a surge of the dumping margin and can hardly be justified from the point of view of WTO rules. The interim reviews, in our opinion, sometimes lead to unfair conclusions. One might perfectly well guess which EU industries are in crisis by simply looking at the goods subjected to antidumping investigations. The situation makes us also wonder whether there are political reasons for this.

There are no more bilateral Summits. They used to take place twice a year and often resulted in important joint undertakings. Thus we have seen no effort to implement EU’s own initiative, supported by Russia, to create a Common economic space from Lisbon to Vladivostok or – in Russian terms – from the Atlantic to the Pacific.

Please do not think that we are complaining. Russia has embarked instead on expanding cooperation with other partners – with China on the “Economic Belt of the Silk Road”, with other members of Shanghai Cooperation Organisation. The Eurasian Economic Union has signed a free trade agreement with Vietnam and is engaged in similar talks with other countries. The US meanwhile has signed the Transpacific Partnership agreement with 11 countries, but not with the EU.

The bilateral “Parnership for Modernisation” initiative born in 2009 was stopped in mid-air. It is simply not being mentioned any more.

Huge energy projects between Russia and the EU are getting cancelled, including “South Stream”. Barriers are put up in advance for “Nord Stream 2”. Meanwhile last year the share of Russian gas in the EU market increased again. Instead, the EU Directorate General on Competition is targeting “Gazprom” and nobody knows how tough its decision will be and how the Russian energy giant will react.

One cannot avoid being concerned with how energy cooperation would be affected by the European Commission plans to take control over intergovernmental agreements and even business contracts between Russian and EU companies in the gas sphere. Could they not lead to destruction of the status quo with unknown, but potentially severe consequences?

A few words on trilateral negotiations between Russia, EU and Ukraine. Frankly, we haven’t remained satisfied with the Commission’s role in last year’s consultations on possible risks for Russia related to implementation of the trade and economic part of the Association agreement between the EU and Ukraine. I took part in the consultations, and I believe that the EU had a chance to prevent the unsuccessful ending which has led to a new spiral of restrictions in Russia-Ukraine trade.

Behind the haze of its “sanctions policy” the EU has still not noticed the opportunities presented by the developing Eurasian integration project. We do not yet have a clear understanding of the EU position regarding the establishment of relations with the Eurasian Economic Union, though relevant proposals have already been made by the Eurasian Economic Commission.

Finally it would be logical to raise a question: how long can this deterioration of mutual economic relations go on?

Let me not get into political details, as this is not the subject of this article. I would just repeat: this deterioration is only partly due to external reasons – the fall of oil prices and global recession. To a bigger extent it is due to man-made decisions which have caused an abrupt disruption of sustainable growth of economic turnover which we had been witnessing up to 2014. It means that amelioration also depends on decisions taken by people.

I presume everybody understands that Russia will not beg the EU to abandon sanctions. Besides, it would not even make sense as the EU is acting in unison with another well-known non-European state. Abrogation of sanctions is up to those who have devised and implemented them.

But let us try to imagine if amelioration happens later rather than sooner?

Firstly, the longer the present “sanctions” period lasts the more Russia will develop its import substitution (already quite visible, for example, in agriculture). The more it will strengthen relations with other sources of food imports – like Latin America, China and – finally – Iran that happens to be our close geographical neighbour fresh from a sanctions-lifting exercise. I would also like to remind that at the WTO Ministerial meeting in Nairobi the EU took an obligation to cancel all types of agricultural export subsidies. It means that certain advantages of EU companies on the Russian market might potentially subside.

We shall need to restore an atmosphere of confidence in mutual business relations which will also imply reestablishing frozen forms of economic dialogue and giving a new spin to the whole mechanism of intergovernmental economic and trade policy contacts to transmit to the business community again a signal of stability and sustainability for the future.

Finally, we would have to return one day to the issue of a new framework agreement - this time not in a bilateral format, but involving the Eurasian Economic Commission, whose terms of reference cover more and more spheres of relations.

To sum up - the situation remains complicated. The challenges are considerable. What we need most of all is to exercise moderation, be prudent and try not to lose a clear vision of the future. In particular, we should not forget - behind transitory and time-serving reasons - the positive experience accumulated over the decades and bear in mind how difficult it can be to restore something once lost.