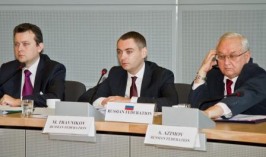 The first Russia-EU Senior official meeting (SOM) on Freedom, Security and Justice was held in Brussels on 24 September 2013. The Russian delegation was headed by Mr. M. Travnikov, Deputy Minister of Justice of Russia, the EU delegation was led by Mr. S.Manservisi, Director-General for Home Affairs of the European Commission, Ms F.Le Bail, Director-General for Justice of the European Commission, as well as directors of the Ministry of Interior and the Ministry of Justice of Lithuania, which is currently holding the Presidency in the Council of the EU.

The decision to organize SOMs was taken at the 16th Russia-EU Permanent Partnership Council (PPC) on Freedom, Security and Justice (Nicosia, 2-3 October 2012), modalities thereof agreed upon in May 2013. The new format of Russia-EU cooperation is set up to ensure continuity of the dialogue on freedom, security and justice in the intervals between annual ministerial Russia-EU PPC meetings.