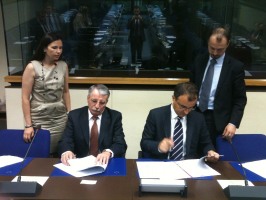 The 9th meeting of the Russia-EU Joint Committee on Readmission took place on 13 July 2011 in Brussels. The Russian delegation was led by Mr. Nikolay Smorodin, Deputy Director of the Federal Migration Service of the Russian Federation.

The Russian side pointed out specific concerns with regard to implementation by certain EU Member States of the 2006 Russia-EU readmission agreement and implementing protocols thereto.

Russia-EU cooperation on readmission issues is interlinked with the Visa Dialogue and represents an important element of common work towards visa facilitation and visa-free travel of Russian and EU citizens.

The next meeting of the Russia-EU Joint Committee on Readmission will be held in Moscow at the end of 2011.