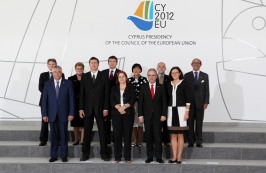 The 16th meeting of the Russia-EU Permanent Partnership Council on Freedom, Security and Justice took place on 2 and 3 October 2011 in Nicosia.

The Russian delegation was led by Mr. Alexander Konovalov, Special Envoy of the President for Cooperation with the EU in the Area of Freedom, Security and Justice, Minister of Justice, and Mr. Vladimir Kolokoltsev, Minister of Interior. Representatives of the Russian Foreign Ministry, Federal Migration, Drug Control and Security Services, as well as General Prosecutor’s Office took part in the meeting.

The European Union delegation was led by Ms Eleni Mavrou, Minister of Interior of the Republic of Cyprus, Mr. Loukas Louka, Minister of Justice and Public Order of the Republic of Cyprus, and Ms Cecilia Malmström, European Commissioner responsible for Home Affairs. Representatives of the next Irish Presidency in the EU and heads of EU agencies also took part in the meeting.

The Parties reviewed progress in the implementation of the Russia-EU Roadmap for the Common Space of Freedom, Security and Justice, endorsed the Work Plan for Dialogue on Migration for 2013-2014.

They discussed implementation of the list of Common Steps towards Visa Free Short-Term Travel of Russian and EU Citizens adopted during the EU-Russia summit in December 2011 and confirmed their willingness to proceed further in their joint work in this direction. The Parties also discussed the prospects of conclusion of an amending Visa Facilitation Agreement.

The participants discussed measures to intensify cooperation in the fight against transnational crime, illicit drugs and corruption and reviewed specific aspects of judicial cooperation.

The PPC adopted Joint Conclusions of the meeting.