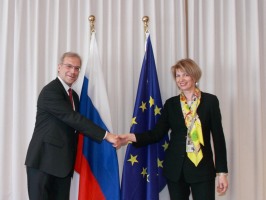 The parties discussed Russia-EU relations, including prospects of a visa-free regime, cooperation in crisis management, development of the “Partnership for Modernization” and optimization of the Russia-EU political dialogue.

The meeting also saw an exchange of views on topical issues of the international agenda: situation in the Middle East, Kosovo, Transnistria and Nagorno-Karabakh settlement as well as the current state of play concerning the Iranian nuclear programme.