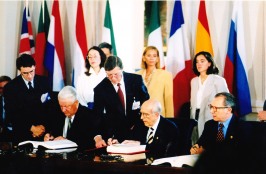 Today, 1 December, marks the 20th anniversary of the entry into force of the Agreement on Partnership and Cooperation Establishing a Partnership between the Russian Federation, of the one part, and the European Communities and their Member States, of the other part. The Agreement was signed on 24 June 1994 on the Greek island Kerkyra (Corfu). It was concluded for a period of 10 years, subject to annual automatic renewal, and still remains in force today.

Having laid a sound legal foundation for Russia-EU relations, the Partnership and Cooperation Agreement (PCA) provided a major impetus to their dynamic development over the subsequent years. It created conditions for gradual Russia-EU convergence with a view to establishing a broad space of economic and humanitarian cooperation in Europe. It shaped a multi-level architecture for sectoral cooperation and provided an institutional framework for bilateral political dialogue. The latter envisaged, in particular, holding Russia-EU summits, as a rule twice a year, and the establishment of a Cooperation Council (since 2003 – Permanent Partnership Council) at ministerial level aimed at regularly reviewing and coordinating interaction. A strong fabric of expert contacts on a wide range of global and regional issues was formed.

The PCA contributed significantly to the development of Russia-EU cooperation in the field of justice and home affairs. Since it entered into force Russia and the EU signed the Visa Facilitation and the Readmission agreements (both in 2006), the Agreement on Protection of Classified Information (2010), initiated and made substantial headway in the work on a visa-free regime between Russia and the EU, established cooperation between relevant Russian agencies with Europol and Eurojust, as well as regular contacts on counter-terrorism and combating illegal trafficking of drugs and psychotropic substances, launched the Migration Dialogue.

It is difficult to overstate the importance of the Agreement in terms of laying the groundwork for developing economic, social and financial cooperation based on principles of mutual benefit, mutual responsibility and mutual support. At the turn of the century the PCA provided significant contribution to putting Russia-EU economic relations in various fields on a long-term and sustainable footing, in particular in the areas of industry, transport, energy, agriculture, financial services, science and technology.

The trade regime established between Russia and the EU through PCA provisions was similar to the rules of the World Trade Organisation, of which Russia was not yet a member at the time. Implementation mechanisms provided by the PCA enabled not only effective resolution of current trade issues, but also improvement of bilateral cooperation, including through gradual harmonisation of Russian legislation with WTO rules.

In the 2000s it became clear that changing realities required the legal basis of the relationship to be updated. New horizons were opened by the four Roadmaps adopted in 2005 by the top leaders of Russia and the EU. Crucially, one of those Roadmaps, related to external security, contained a reference to the recognition of the important role of processes of regional cooperation and integration, in which Russia and the EU participate, in strengthening security and stability in a greater Europe. At the Russia-EU summit in London in 2005 political agreement was reached to conclude a New Basic Agreement (NBA) to replace the existing PCA. 12 rounds of negotiations, launched in July 2008, took place. Today, however, negotiations on the NBA are suspended.

Many of the mechanisms of Russia-EU dialogue developed under the PCA fell prey to short-sighted Western policies in the course of the Ukraine crisis. Bilateral sectoral dialogues became bogged down that used to provide effective mechanisms for direct cooperation between Russian federal executive bodies and relevant branches of the European Commission. A great number of channels of cooperation were frozen. In material breach of PCA provisions the EU imposed sectoral (economic) sanctions against Russian companies. Additional artificial barriers were put up in the path towards liberalisation of the visa regime for Russian and EU citizens, including the openly discriminatory EU ban on issuance of Schengen visa for residents of Crimea.

We are confident that long-term interests of our countries and peoples born in a common “European cradle” will ultimately prevail over fleeting political considerations. In spite of persistent efforts by opponents of Russia-EU cooperation, mutually beneficial relations between our countries continue to develop, generating social, cultural and academic links and new promising commercial projects. The European Union remains our largest trade and investment partner, while Russia is one of key export markets for EU states and the primary energy supplier to European markets. Given the dynamic development of the Eurasian Economic Union, the prospect of creating a common economic and humanitarian space from Lisbon to Vladivostok is growing in importance. In our view, the process of convergence among integration projects across the pan-European space could be facilitated by setting up direct contacts between the institutions of European and Eurasian integration. Today’s anniversary is undoubtedly an invitation for us to reflect on the promising potential of constructing a genuinely equal and mutually beneficial Russia-EU partnership based on respect for each other’s interests. We expect the EU to demonstrate political will to kick off cooperation on this continent-wide project.