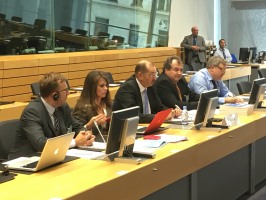 Russia-EU expert consultations on drugs were held on 22 September 2016 in Brussels. The Russian interagency delegation was led by Alexey A. Rogov, Deputy Director of the Department on New Challenges and Threats of the Ministry of Foreign Affairs. The EU delegation was headed by Richard Toth, Chairman of the Horizontal Working Party on Drugs, Counsellor of the Permanent Representation of the Slovak Republic to the EU.

Issues of respective drug policies, drug situation in Russia and EU Member States, spread of new psychoactive substances, narcotics of Afghan origin and implementation of outcomes of the UNGA Special Session on the world drug problem (New York, April 2016) were discussed during the consultations. The delegates of Russia and the EU exchanged views on various policies to reduce drug demand and rehabilitation methods.

The consultations reaffirmed similarity of the parties’ approaches regarding the main issues of combating drug trafficking.