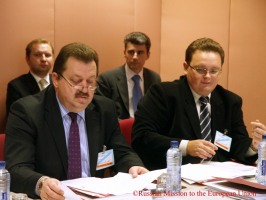 The twelfth round of human rights consultations within the framework of the regular bilateral political dialogue between the Russian Federation and the European Union was held in Brussels on 17 November 2010.

In the course of the consultations the Russian side raised a number of issues related to modern forms of racism, racial discrimination, xenophobia, discrimination of Russian-speaking minorities in the Baltic States and problems with respect of the rule of law within the European Union in general. In the context of the 65th anniversary of end of WW2 the problem of revision of history, glorification of Nazis and their accomplices in some European states was discussed.

Representatives of the EU were provided with detailed explanations regarding different aspects of Russian legislation and law-enforcement practices governing the activities of non-commercial organizations, ensuring freedom of expression and mass-media as well as with information on the progress of reforms of the judicial, penitentiary system and law-enforcement authorities.

A comprehensive exchange of views on a wide range of issues currently on the international human rights agenda took place, including the forthcoming review of the activities of the UN Human Rights Council, reform of the European Court on Human Rights, prospects of the EU accession to the European Convention on Protection of Human Rights and Fundamental Freedoms as well as cooperation on human rights issues within the OSCE. The Parties also discussed different aspects of implementation of international commitments on promotion and protection of women’s rights.