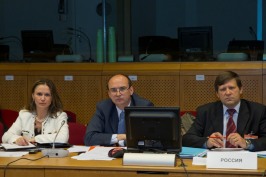 Annual expert consultations on drugs in the framework of the Russia-EU political dialogue took place on 9 November 2011 in Brussels.

The Russian delegation led by Mr. D.Kurakov, Deputy Director of the Department on New Challenges and Threats of the Ministry of Foreign Affairs, included experts of the Federal Drug Control Service, Ministry of Interior and Permanent Mission to the EU. The EU delegation was composed of representatives of the Polish Presidency, European Commission, EEAS, Europol, European Centre for Drugs and Drug Addiction, as well as representatives of a number of Member States as observers.

The Participants reviewed the drug situation in EU and Russia, discussed the state of cooperation between relevant anti-drugs agencies and perspectives for joint actions in international and regional formats.

They highlighted the importance of the Third Paris Pact Ministerial Conference on suppression of spread of Afghan opiates to be held in February 2012 in Vienna. It was agreed to enhance sharing of experience in the field of rehabilitation of drug addicts.

Fight against synthetic drugs and suppression of illegal deliveries of drug precursors to Afghanistan were emphasized as promising tracks of Russia-EU anti-drug cooperation.