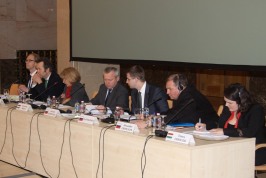 The second expert meeting of the Russia-EU Dialogue on Migration dedicated to illegal migration issues was held on 30 March 2012 in Budapest.

Participants from the Russian side included representatives of six relevant agencies: Ministry of Foreign Affairs, Ministry of Interior, Ministry of Mass Communications, Federal Migration Service, Federal Security Service, Federal Border Management Agency (Rosgranitsa), as well as Permanent Mission to the EU and Embassy in Hungary. The EU was represented by experts of the European Commission, FRONTEX and 15 Member States.

Participants exchanged views on a wide range of issues related to illegal migration in EU Member States and Russia, discussed general migration situation in the European continent, shared experience in combating illegal migration and trafficking in human beings, as well as best practices in application of modern information technologies. Specific directions of further development of Russia-EU cooperation in this field were identified at the meeting.

The Russia-EU Dialogue on Migration was launched in May 2011. The first meeting dedicated to international protection was held on 14 December 2011 in Moscow. In 2012 meetings on legal migration and on links between migration and development are to be organized later this year.