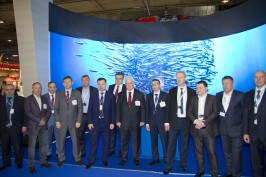 After a lengthy pause Russia has resumed its national participation in the biggest specialised event in Europe and worldwide in the sphere of fisheries and fish processing Seafood Expo Global/ Seafood Processing Global 2016 which took place on 26-28 April in Brussels.

On the opening day the Permanent Representative of the Russian Federation to the EU Ambassador Vladimir Chizhov together with Deputy Head of the Russian Fishery Agency Peter Savchuk visited the unified Russian sector of the exhibition, where possibilities and achievements of Russian companies were presented, and spoke with professionals in the field of fishery and fish processing.

The subsequent reception at the Mission on the occasion of Russia's participation in the exhibition was attended, among others, by the Minister of Foreign Affairs and Trade of the Faroe Islands Poul Michelsen, representatives of the European Commission, diplomatic missions, as well as business circles from EU Member States and other countries.

Presently, Russia is a major player in the sphere of fisheries and steadily ranks 5-th or 6-th in the world in terms of volume of fish catch (4,4 million tons in 2015). The potential of the country demonstrated in this sector was received with evident interest by foreign business and proved important for the establishment of business contacts with partners from different regions of the world. Russian companies agreed a number of investment projects and concluded contracts in the amount of around 100 million euros during the exhibition.