Remarks by President of Russia Vladimir Putin at the Remembering the Holocaust: Fighting Antisemitism international forum 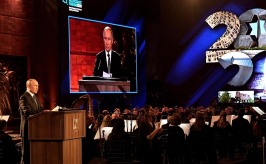 Today we are brought together at the international forum to honour the victims of the Holocaust by a shared responsibility, our duty to the past and the future.

We mourn all the victims of the Nazis, including the six million Jews tortured in ghettos and death camps and killed cruelly during raids. Forty percent of them were citizens of the Soviet Union, so the Holocaust has always been a deep wound for us, a tragedy we will always remember.

Before visiting Jerusalem, I looked through original documents, reports by Red Army officers after the liberation of Auschwitz. I must tell you, colleagues, it is very difficult, unbearable to read these military reports, documents describing in detail how the camp was set up, how the cold-blooded killing machine worked.

Red Army Field Marshal Konev, who then led the military operation to capture the densely populated Silesian industrial region of Germany, used tactics to spare as many civilians as possible and, having received a report about the atrocities committed at Auschwitz, forbade himself from even seeing this camp. Later he wrote in his memoirs that he had no right to lose his moral strength, so that a fair sense of revenge would not have blinded him during military operations and would not have caused additional suffering and casualties among the civilian population of Germany.

January 27 marks the 75th anniversary of the liberation of Auschwitz. In this hell, where people from different countries were brought for torture, monstrous experiments and mass killing, hundreds of thousands of people of different ethnicities died. More than half of them were Jews.

The crimes committed by the Nazis, their deliberate, planned, and as they said, ”final solution to the Jewish issue,“ is one of the darkest and most shameful pages of modern world history.

But we should not forget that this crime also had accomplices. They were often crueler than their masters. Death factories and concentration camps were served not only by the Nazis, but also by their accomplices in many European countries.

The Holocaust was deliberate annihilation of people. But we must remember that the Nazis intended the same fate for many other peoples. Russians, Belarusians, Ukrainians, Poles and many other peoples were declared Untermensch. Their land was meant to serve as living space for the Nazis, providing for their prosperous existence, while the Slavs and other peoples were meant either to be exterminated or to become slaves without rights, culture, historical memory and language.

Back in 1945, it was first of all the Soviet people who put an end to these barbaric plans. As it has just been said, they protected their Fatherland and liberated Europe from Nazism. We paid a price no nation could even imagine in their worst dreams: a toll of 27 million deaths.

We will never forget this. The memory of the Holocaust will serve as a lesson and a warning only if it remains fully intact, without any omissions. Unfortunately, today the memory of war and its lessons and legacy often fall subject to the immediate political situation. This is completely unacceptable. It is the duty of current and future politicians, state and public figures to protect the good name of the living and fallen heroes, civilians and victims of the Nazis and their allies.

We must use everything we have – our informational, political and cultural capabilities as well as the reputation and influence our countries have in the world – to this end. I am sure that everyone present here today, in this audience, shares these concerns and is ready to protect truth and justice together with us.

We are all responsible for making sure that the terrible tragedies of this war will not happen again, that the generations to come will remember the horrors of the Holocaust, the death camps and the siege of Leningrad – Prime Minister Netanyahu has just said that today a monument to the victims of the siege was unveiled here in Jerusalem – Babi Yar, and the burned-down village of Khatyn, remember that we must remain alert and must not overlook when the first seeds of hate, chauvinism and antisemitism take root, or when people start to indulge in xenophobia or other similar manifestations.

Destruction of the past and lack of unity in the face of threats can lead to terrible consequences. We must have the courage to be straight about this and do everything to defend peace.

I think an example could and should be set by the founding countries of the United Nations, the five powers that bear special responsibility for the preservation of civilisation.

We have discussed this with several of our colleagues and, as far as I know, have received a generally positive response to holding a meeting of the heads of state of the five permanent members of the UN Security Council: Russia, China, the United States, France and Britain. We can hold it in any country, in any place that our colleagues would find convenient. Russia is ready for such a serious discussion. We intend to send this proposal to the leaders of the Five without delay.

We are faced with many challenges. We discussed one of them recently at the initiative of German Chancellor Angela Merkel. This is about Libya. But we will have to return to this issue at the Security Council and adopt a relevant resolution.

There are many other problems as well. I consider it important and symbolic to hold the proposed meeting this year. After all, we are celebrating 75 years since the end of World War II and the foundation of the United Nations.

A summit of the states that made the main contribution to the routing of the aggressor and the formation of the postwar world order can play a big role in searching for collective ways of responding to current challenges and threats and would demonstrate our common commitment to the spirit of allied relations, historical memory and the lofty ideals and values for which our predecessors, our grandfathers and fathers fought shoulder to shoulder.

In conclusion, I would like to thank our Israeli colleagues for a warm, very hospitable reception here in Jerusalem, and to wish peace, prosperity and all the best to everyone at the conference, and, of course, to the citizens of Israel.