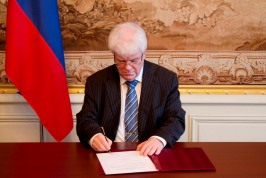 In Brussels on 7 November 2014 the Permanent Representative of the Russian Federation to the EU, Ambassador Vladimir Chizhov, and on 11 November the Director for the Neighbourhood of the Directorate-General for Development and Cooperation of the European Commission Michael Köhler signed a Protocol to the Agreement between the Government of the Russian Federation and the European Community on Financing and Implementing the Cross-Border Cooperation Programme “Estonia - Latvia - Russia” of 18 November 2009. The Protocol provides for the extension of the period of implementation of projects in the framework of the said Programme until 31 December 2015.

The Programme, co-financed by Russia and the EU, encompasses Saint-Petersburg, the Leningrad and Pskov Oblasts, as well as bordering territories of Latvia and Estonia. Its aim is to enhance cross-border cooperation in various spheres, including transport, tourism, energy, entrepreneurship, environment, culture, sports, education, health care and people-to-people contacts.

The Russian Federation and the European Union are currently cooperating on the preparation of the bilateral “Latvia - Russia” and “Estonia - Russia” Programmes for the period until 2020, which will replace the Programme “Estonia – Latvia - Russia” upon its completion.