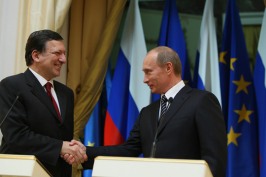 On 23-24 February Brussels will host a meeting between the Russian Government and the European Commission with the participation of Prime Minister Vladimir Putin. It will be the fourth meeting in this format which was launched in 2004. The last one was held in February 2009 in Moscow.

The meeting will concentrate on issues of trade and economic cooperation in the post-crisis period, including in the light of Russia’s upcoming accession to the WTO; cooperation in the field of energy, embracing such problematic aspects as the 3rd EU energy package; development of industrial, scientific and technical cooperation; travel regime for citizens of Russia and the EU; deeper interaction in justice and home affairs; Russia-EU cooperation in the international arena. Discussions will also include the Partnership for Modernisation initiative launched in June 2010 at the Russia-EU summit in Rostov-on-Don.

The EU delegation headed by the President of the European Commission, Jose Manuel Durao Barroso will include 23 out of 27 commissioners, including Catherine Ashton, Vice-President/High Representative for Foreign Affairs and Security Policy, Vice-Presidents of the European Commission Antonio Tajani (Industry and Entrepreneurship), Neelie Kroes (Digital Agenda) and Viviane Reding (Justice, Fundamental Rights and Citizenship), and Commissioners Karel De Gucht (Trade), Dacian Cioloş (Agriculture and Rural Development), Máire Geoghegan-Quinn (Research, Innovation and Science), Günther Oettinger (Energy), and others. The plenary session will be preceded by bilateral meetings between the Russian Ministers and their counterparts from the European Commission for deeper elaboration of sectoral cooperation.

The Russian Government – European Commission meeting is also expected to identify priorities of cooperation to achieve mutual goals of technological, industrial and business development and provide an impetus for solving problems in trade and economic relations.

The European Union is a strategic and leading economic partner of Russia. More than half of Russian foreign trade turnover fall to the EU's share, having seen 29,6% growth in 2010. Russia is the third leading partner of the EU (after the US and China), as well as a major supplier of natural gas and the second exporter to the EU of crude oil and oil products. About 80% of cumulative foreign investments in Russian economy come from EU member states, 60% of Russian foreign investments are allocated to the EU.