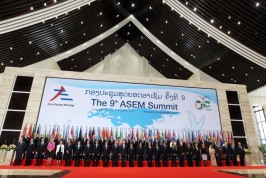 Mr. Chairman, colleagues, I would also like to begin by saying some words of gratitude <…> Since the economy and the problems facing the financial markets were discussed at length yesterday, I will focus on more specific issues, which are nevertheless of great importance.

Let us turn to the international situation… Previous speakers mentioned a number of problems, such as regional and local conflicts, the proliferation of weapons of mass destruction, international terrorism, cross-border crime, and others. But if we go back to the current agenda, the greatest concern for all of us is the situation in Syria. Russia has consistently proceeded from the assumption that it is the Syrian people themselves, not international organisations or other forces, that should decide their country’s future. The biggest challenge today is how to help them achieve this.

We continue to believe that there is no reasonable alternative to a political and diplomatic settlement of the issue of the Korean peninsula. The six-party talks should be resumed as soon as possible.

It is also important to continue the dialogue on the Iranian nuclear issue. Russia proceeds from the assumption that every state, including Iran, has the right to pursue a civilian nuclear programme. But at the same time, there needs to be a comprehensive and international monitoring of these activities. And, finally, we need to concentrate our efforts on the fight against drug trafficking, which is why we attach great importance to cooperating with other ASEM member countries.

And now, let me say a few words about nuclear non-proliferation and nuclear security, which Mr Jose Manuel Barroso (President of the European Commission) just spoke about. We proceed from the need to support the Nuclear Non-Proliferation Treaty. A tried and tested benchmark for subsequent efforts in this area are the decisions of the 2010 Conference. We would also welcome another review process on the treaty. It is clear that there is a need for a dialogue on nuclear disarmament, and a prerequisite for this dialogue should be the consideration of all international security factors capable of affecting strategic stability. In this sense, Russia has a special responsibility: together with the United States we have taken steps to reduce and limit nuclear weapons. But these steps are bringing us to the point where not only Russia and the United States, but all countries with a nuclear capability, should join these efforts. In this context, the missile and nuclear programmes of countries which have so far refused to join the nuclear non-proliferation treaty need to be taken into account.

Another global challenge is energy. A new architecture of energy cooperation needs to be created to meet the interests of all participants. Energy security has emerged as an indispensable condition of efforts to improve the legal framework of energy cooperation, against the background of shifts in the global energy arena and the advent of new threats to the stability of energy markets. We believe that energy security should be based on collective efforts, including a reliable supply of traditional energy resources and improved efficiency of their use, given the necessity of protecting the environment and the development and use of new energy sources. That is why there are a number of initiatives that could be used here, including Russia’s global energy initiative. We proceed from the assumption that the energy cooperation in the Asia Pacific Region will continue to strengthen. However I would like to note that, as one of the key suppliers of hydrocarbons and other types of energy, our energy strategy is based on increasing the share of Asia Pacific states in Russian exports to almost 30%. We think it is important to hold relevant forums, including the holding, under the auspices of the UN Economic and Social Commission for Asia and the Pacific, of the Asian Pacific Energy Forum scheduled to be held in Vladivostok in May 2013. I invite everyone to take part in this forum.

Another challenge is food. Food is becoming more expensive and it’s unlikely that this trend will turn around any time soon. This is having an extremely negative impact on living standards in a number of ASEM countries, jeopardising the Millennium Development Goals, and, of course, causing social and political instability. We will participate in the international programmes designed to address the food crisis, including the ones led by the United Nations and its specialised agencies. It is very important to build up innovation-driven technologies, make effective use of natural resources and improve the quality of food. This is one of our national priorities; we are open to cooperation with partners. A key element is creating an Eastern grain corridor, which entails the building of major grain terminals in Russia’s Far East. As we see it, this will be of use for all Asian countries. We will of course contribute to ensuring a sustainable supply of food to the region. Russia also confirms its commitment to achieving the Millennium Development Goals and putting into practice the Johannesburg Plan of Implementation in terms of water management. Water is our common asset and we have a duty to act jointly in this regard.

Environmental protection is another issue. We advocate the consolidation of the UN environmental protection programmes as a key mechanism for coordinating international conservancy activities. We need to ensure the implementation of these programmes, including the Bali Action Plan. We support the results of the 2011 UN Climate Change Conference in Durban. Of course, we need to decide what should be done next and understand how the conservancy mechanism will work. We need to draft proper international regulations. We also need to agree on goals and measures to cut greenhouse gas emissions, which should be binding for everyone without exception. I want to specifically emphasise this point. Actually, this is a critical and extremely complicated issue. All our efforts will be wasted if we fail to enforce these measures.

The aftermath of natural disasters and industrial accidents mentioned earlier by my colleague from Vietnam, is also being discussed here. Unfortunately, the Asian region has had too many of them. The main areas for cooperation range from providing relief aid during disasters to creating an early warning system. We must pool our efforts and, at the same time, study the possibility of creating a network of cooperation so as to be able to implement an initiative to create a special international mechanism to provide relief in industrial accidents and natural disasters. I believe it is essential to have this mechanism in place today.

Naturally, efforts to combat international terrorism and extremism, which clearly present a real threat to the sustained development of the European countries and those of the Asia Pacific region, are another issue. We will keep working in this area. We also believe it’s imperative to establish dialogues with the countries of our group in combating money-laundering and the financing of terrorism. This work must be carried on at bilateral and multilateral levels, including the Financial Action Task Force (FATF) and the Asia Pacific Group on Money Laundering (APG), which is based on FATF.

Anti-piracy measures off the Somalian coast and in some other regions are another challenge facing us. Our efforts include a decision to escort vessels carrying humanitarian relief aid under the UN World Food Programme and providing emergency assistance to the crews of the anti-pirate coalition, including refueling and water provisions. I believe that we must continue our consultations on this issue and cooperate with all stakeholders. Notably, we need to have it done in order to normalise the situation and to finally decide on how to prosecute pirates because this international mechanism is not functioning as it is, and we are unable to accomplish anything in this respect.

Our countries have diverse cultures, as we saw at yesterday’s concert. It is very important that we search for approaches that bring us closer to each other and help establish a balanced inter-civilisational dialogue with European states and our Asian partners. We are involved in the activities of the ASEM Inter-Faith Dialogue. This work must continue. We believe Asian countries should play a greater role in the alliance of civilisations, which is the broadest inter-civilisational action platform in terms of membership, where religious leaders, international organisations and societal organisations are working together with great success. In this context, Russia is ready to host an international conference to promote inter-faith and inter-civilisational dialogue as part of the ASEM Inter-Faith Dialogue, all the more so since Russia has numerous ethnic groups and religions. We have representatives from many diasporas and religious groups, and we have accumulated some positive cooperation experience. Nevertheless, we believe that UNESCO, which also has substantial experience and opportunities in this area, should be considered the central mechanism for conducting global inter-cultural dialogue.

These are the key issues, which I would like to discuss today. Thank you very much once again for this opportunity to speak.

Source: Government of the Russian Federation