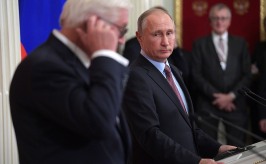 We are pleased to receive President of the Federal Republic of Germany, Mr Steinmeier, who is visiting Russia for the first time as President of the Federal Republic of Germany. He is an experienced diplomat and statesman. We have known each other for a long time. He has visited our country often, and we met many times, but we are receiving him for the first time in this capacity.

During the talks, we discussed in detail various aspects of bilateral cooperation, and exchanged views on important international and regional matters. It was noted that despite the well-known political difficulties, Russian-German relations are not treading water, and we are willing to work together to further develop them.

Even in the face of various restrictions of a political nature and the decline in bilateral trade, which largely stems from that, Germany remains one of our leading foreign economic partners and a key investor in the Russian economy.

We noted with satisfaction that trade has started to grow this year again. While in 2016 bilateral trade declined by 11 percent, it was up as much as 25 percent in January-July 2017. The inflow of direct investments from Germany has also increased. In the first quarter of this year alone, they reached $312 million, significantly exceeding the 2016 total of $225 million.

There are over 5,500 enterprises with German capital successfully operating in Russia. Their total revenue exceeds $50 billion. I should also add that German business is set to expand its operations on the Russian market. As you may know, this was discussed, in particular, at a meeting with senior members of the German Committee on Eastern European Economic Relations and top executives of leading German companies in Sochi on October 12. The event was also attended by President Nazarbayev of Kazakhstan.

During the talks with Mr Steinmeier, we also addressed a traditional sphere of bilateral relations – energy. We spoke in favour of fostering industrial cooperation. I would like to point out that since the start of the year, several new plants built with German business participation have opened in Moscow and Samara regions.

In addition, in June, on the sidelines of the St Petersburg Economic Forum, a contract was signed with the German company Linde to launch a new large-scale petrochemical facility in Tatarstan with a total investment of $10 billion.

Scientific contacts are forging ahead. The world’s largest X-ray laser was built with advanced Russian technology within the framework of the XFEL project in Hamburg. This will make it possible for scientists to address tasks that were once deemed technologically impossible.

Regarding cultural cooperation, first of all, I would like to mention the German President’s participation in today’s ceremony of handing over the Cathedral of St Peter and St Paul in Moscow to the Evangelical Lutheran Church of Russia. The event was timed to coincide with the 500th anniversary of the Reformation – a religious and socio-political movement that, as is known, originated in Germany.

We agreed to facilitate the further expansion of interregional cooperation and contacts, including through non-governmental organisations. The bilateral Year of Municipal Partnerships was launched in June. Delegates from 90 Russian and 46 German cities attended its opening. Plenary meetings of the Petersburg Dialogue Forum and the second Potsdam Meetings youth forum are planned for November.

We naturally covered important issues of the international agenda and thoroughly discussed the situation in Syria. We share the opinion that it is necessary to achieve the complete and final elimination of terrorists in that country, and to step up efforts to promote a political settlement.

Of course, we also touched upon the state of affairs in Ukraine. The President is fully aware of all the intricacies involved in this subject. As you may be aware, when he was foreign minister, he proposed a number of solutions, which bear his name. I hope that they will be seen to completion in the course of future work.

The President and I once again noted that unfaltering compliance with the Minsk agreements is the basis for a sustainable and comprehensive settlement in southeastern Ukraine. In this context, we discussed the Russian initiative to establish a UN mission to ensure the security of OSCE observers in the conflict zone.

We also exchanged views on the Iranian nuclear programme and the crisis on the Korean Peninsula.

In general, the talks were very useful and took place in a constructive and very businesslike atmosphere. I would like to express my gratitude to the President for that. I am confident that this visit will be beneficial for promoting bilateral relations between the Federal Republic and the Russian Federation.

Federal President of the Federal Republic of Germany Frank-Walter Steinmeier(retranslated): Thank you very much, Mr President.

I am very pleased to be in Moscow, and, as you mentioned, not for the first time, but this is my first time as Federal President.

I am very grateful to you for the important and very generous gesture you made today, which is to return the St Peter and St Paul Cathedral in Moscow to the Evangelical Lutheran Church. Not only was it a respectful ceremony, I am confident that this gesture was received here in Moscow and in Germany as an important message for the Evangelical Lutheran community in Moscow and Germany, which celebrates the 500th anniversary of the Reformation this year. A grand ceremony will soon take place in Wittenberg.

I came here and used this meeting as an opportunity to have a very detailed conversation about the state of relations between our countries. I think we are united in the opinion that we cannot and should not be satisfied with the current state of affairs. We are still far from enjoying normal relations; there are still open wounds and unresolved issues, primarily, with regard to Crimea becoming part of Russia and the conflict in eastern Ukraine, which continue to burden our relations. In addition, we have also spoken about recent arrests here in Moscow.

I do not think that a single meeting or a single conversation can help overcome the situation that has taken shape over the past few years. Nonetheless, I am convinced that we need such meetings as today’s, and we should have more meetings like today's – not only abstractly between our countries, but absolutely concretely between high-ranking representatives of our states.

Today I would like to see if there are ways out of the negative spiral that you have observed during the past few years. The loss of trust, mutual recriminations and misunderstanding – can we overcome all this? The Russian President told us today what he thinks about the future of relations between Germany and Russia.

I believe we cannot erase the alienation of the past, but we should aim to counteract the significant discord of recent years with more predictability and the restoration of some minimal level of confidence. Our mutual relations (I am referring not only to those who are responsible for them in the Government, but also to people in Russia and Germany) are too important for us to have no dialogue, considering that we can clearly convey our ideas to each other.

Russia and Germany are linked by a history that goes back more than a millennium, and this history is too diverse to be viewed in black and white. This is why it is so important for me to resist the alienation of the past few years and to keep saying that we live in Europe together. It is our duty to our nations to always continue looking for what we have in common despite all the disagreements and conflicts. We spoke about this today during the lunch with representatives of the Russian leadership.

I think in addition to the subjects mentioned by your President, Russia is highly interested in cultural and scientific exchanges and in making them more intensive than they were in the past few years.

I believe we are realistic enough to say that something may be achieved in the course of one conversation. But we will make our joint efforts our homework, with the goal of not only strengthening our relations but also improving them.