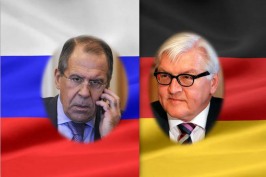 The ministers discussed current issues related to promoting the implementation of the Minsk Package of Measures, including the need to synchronise steps on the political settlement of the domestic conflict in Ukraine with the resolution of security problems.

The possibility of convening a new ministerial meeting in the Normandy format will depend on Kiev’s readiness to play a constructive role in coordinating such steps. Mr Lavrov said the meeting will require thorough preparation.