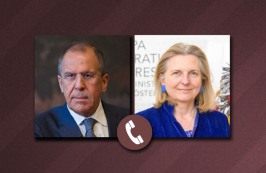 On December 22, on the initiative of the Austrian side, Russian Foreign Minister Sergey Lavrov had a telephone conversation with Federal Minister for Europe, Integration and Foreign Affairs of the Republic of Austria Karin Kneissl, sworn in on December 18, 2017.

Sergey Lavrov congratulated his counterpart on her appointment and expressed hope that Austria’s new Government will continue to opt for the steady development of bilateral relations in various fields.

The sides discussed certain aspects of the Russian-Austrian agenda, as well as important international matters of mutual concern, as Austria prepares to take over the EU presidency in the second half of 2018.