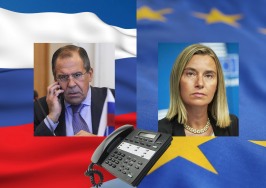 On October 3, Foreign Minister Sergey Lavrov spoke by phone with High Representative of the European Union for Foreign Affairs and Security Policy and Vice-President of the European Commission Federica Mogherini at the EU’s request.

The officials discussed the Syrian conflict. Both parties confirmed that every effort to resolve the Syrian crisis – ensuring the ceasefire, expanding humanitarian access and launching the political process – should be implemented in line with UN Security Council resolutions, without unilateral prerequisites and attempts to precondition an advance in one area by achieving progress in another.

The sides agreed to continue contacts on this issue.