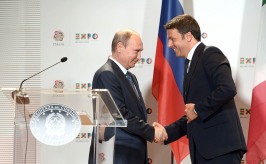 First of all, I want to thank our Italian friends for the invitation and for the exposition’s excellent organisation

Today, together with Mr Matteo Renzi, as he just said, I visited the Russian and Italian pavilions at the Expo 2015 Universal Exposition. The exhibition presented there vividly illustrates the tremendous opportunities for cooperation between our countries in protecting nature and its resources and guaranteeing food security for the world’s people.

During the talks in narrow format that we have just concluded, we had a detailed discussion of the current state of our bilateral relations and exchanged views, as Mr Renzi said, on a number of current international issues.

Italy is one of Russia’s biggest economic partners in Europe and is in third place in terms of trade volume. Due to the circumstances we know, our bilateral trade has dropped of late, down by 10 percent for 2014, and down by 25 percent for the first quarter of 2015. Naturally, this situation is not to the liking of either our governments or our business communities.

We know that Italian businesspeople do not want to break off their mutually advantageous projects with Russia. Businesspeople have been showing considerable interest in the Russian exhibition at Expo 2015. Italian business will be well represented at the St Petersburg International Economic Forum on June 18–20, particularly at the special seminar that we have planned: Russia and Italy – strengthening trade and investment ties at a time of geopolitical tension.

Italian companies are following an active policy of localising their production in Russia. We are moving from buying goods made in Italy to having Russian companies produce goods marked ‘made jointly with Italy’. A number of important projects were carried out over the last year in the pharmaceuticals, automotive and other sectors.

For example, Finmeccanica is working together with Sukhoi Corporation to develop a medium-haul passenger plane and is preparing an agreement with Rosneft to develop joint production of heavy helicopters for work at Russia’s offshore oil and gas fields.

Italy is the second largest buyer of Russian gas in Europe, after Germany. In 2014, we exported 21.7 billion cubic metres of gas to Italy. Italian companies are taking part in the programmes to modernise Russia’s power generation plants. In particular, Enel has invested large sums and is working actively in this area. Rosneft and ENI have plans for joint offshore development in the Barents and Black seas. LUKOIL and another Italian company are developing promising energy sector technology, including wind-powered energy.

Our countries have close humanitarian ties and contacts. At the foundation of these ties is a mutual interest in each other’s history, culture, language, traditions and customs. During my conversation with the Prime Minister just before, I said that Russia sees some aspects of Italian culture as its own, things that have become intrinsically woven into our own cultural life.

Around one million Russian tourists visit Italy every year, and 200,000 Italians visited Russia last year. We have the Russian-Italian Civil Society Dialogue Forum, which will soon hold its next meeting in St Petersburg.

I discussed in detail a number of international issues with Mr Renzi, as I said. Above all, we looked at the Middle East, North Africa, and Libya.

What can I say on these issues? Clearly, what is happening in Libya now is the direct result of the disastrous social and economic situation and the unceasing attacks by radical groups. We believe that what we are seeing now is essentially the collapse of Libya as a state, and this is a result of the external military intervention that took place in 2011.

Russia supports resolving the Libyan crisis through peaceful means. We seek joint constructive work with our international and regional partners, including through the UN Security Council.

We touched on the situation in Syria and Iraq too, where terrorist groups, including the Islamic State, are creating havoc.

Of course, as the Prime Minister also mentioned, we discussed the crisis in Ukraine too. Both countries believe that peaceful settlement is the only possible solution here, and I want to say that Russia, like Italy, wants to see full implementation of the Minsk agreements.

This document that was approved in the Belarusian capital covers all key aspects for a settlement: political, military, socioeconomic, and humanitarian. Unfortunately, however, these provisions are not being implemented in full but only selectively.

Our joint work with Mr Renzi continues. Ahead, we have discussions together with the delegations and with representatives of some of our countries’ government ministries and members of our business communities.

As was already noted, I will also meet today with the President of Italy, Mr Mattarella, and will visit the Vatican too, where I will meet with Pope Francis.

In conclusion, I want to thank the Italian Prime Minister once again for the invitation to Expo 2015, for taking part in the Day of Russia opening ceremony together, and for today’s substantive conversation.

Question: Did you discuss the sanctions? What do you expect from Europe and from Italy? Would tougher sanctions lead Russia to revise its relations with countries with which it has a good dialogue in place?

Vladimir Putin: We did discuss sanctions, but in very down-to-earth terms, if you will. We did not discuss their end or reduction, but spoke about the fact that these sanctions are hindering us from developing our relations. We have, for example, several joint Russian-Italian projects, including infrastructure projects. Obviously, the Italian companies that fought for these contracts and won tenders want these projects to go ahead. But these projects have ground to a halt and cannot proceed because of the sanctions against our financial institutions. We need to find a solution – either end the sanctions, or find some other instrument, if, of course, you want to support your companies. We will find partners, of course, but I do not think that it would make sense to abandon the instruments we have already tried and tested, or give up mutually advantageous contracts.

The same goes for our cooperation in the military technical field. To be honest, this cooperation is nothing so amazing, and has no fundamental importance for Russia’s defence capability, but withdrawing from several joint plans and contracts that were agreed earlier has cost Italian companies a billion euros. This is money they could have earned, orders that would have kept their companies busy, and jobs that could have been created or maintained. This did not happen, however, because of the sanctions.

We are now carrying out an import replacement programme in Russia, and overall, this even has some benefits for our industry and advanced technology. Looking at the bigger picture though, this is damaging for our cooperation, of course. I hope that we will sooner or later put the restrictions we face today behind us.

Question: How do you see the future for Russia’s relations with the G7, and to what extent can we compare this group with the G20?

Vladimir Putin: As far as our relations with the G7 are concerned, we have no relations. What relations can there be? When we worked in this group, we took part in discussions and in drafting final documents that, incidentally, were not binding in nature.

I think there was sense in this work because we provided an alternative point of view at least. Our partners decided that they do not need an alternative point of view. This is their decision. But the G7 is not an organisation as such, rather, it is a club for people sharing common interests. We wish them success, because, as it seems to me, all contacts and discussions can always help to develop international relations.

There are broader formats too, such as the G20. We are working actively in the BRICS group, which unites Brazil, Russia, India, China and South Africa. We work in the Shanghai Cooperation Organisation too, which alongside its current members, will soon be joined by India and Pakistan. We are also very active in our work within the UN and its Security Council. If our partners wish, we are ready to develop active relations on a bilateral basis with any of the countries in the G7.