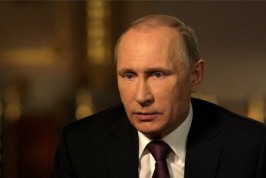 VLADIMIR SOLOVYOV: Mr President, our nation just celebrated Defender of the Fatherland Day, but our brotherly nation of Ukraine now considers this the day that Crimea was conquered, and Petro Poroshenko states that he will do everything possible to get Crimea back.

What is the current state of Russian-Ukrainian relations? Will we wake up one day to learn we are at war?

PRESIDENT OF RUSSIA VLADIMIR PUTIN: I think that this apocalyptic scenario is highly unlikely, and I hope it never comes to that.

As for returning any territories, that is revanchist talk and it’s not about returning territories anywhere. In my opinion – and I do not want to give any advice, but still – the current leadership of a large European nation such as Ukraine should first return the country to normal life: fix the economy, the social sector, its relations with the southeast region of the country in a civilised manner, and ensure the lawful rights and interests of the people living in Donbass. If the Minsk agreements are implemented, I am certain that this will be done.

As for Crimea, you should remember that a year ago, when I spoke to the Federal Assembly deputies about this, I said that Crimea has always been and remains Russian, as well as Ukrainian, Crimean-Tatar, Greek (after all, there are Greeks living there) and German – and it will be home to all of those peoples. As for state affiliation, the people living in Crimea made their choice; it should be treated with respect, and Russia cannot do otherwise. I hope that our neighbouring and distant partners will ultimately treat this the same way, since in this case, the highest criteria used to establish the truth can only be the opinion of the people themselves.

VLADIMIR SOLOVYOV: There has been a break in opinion between the American side of the establishment and the European side. The American side says that Russia directly invaded Debaltsevo, that new sanctions should be imposed against Russia, and John Kerry even accused his European partners of taking a cowardly position. Europe currently does not support this. That is the cause of the break.

VLADIMIR PUTIN: Honestly, I have not even heard such assessments. You should know better.

VLADIMIR SOLOVYOV: We say that a civil war is underway. Ukraine says, “No, this is a direct intervention by Russia.” Why doesn’t the world see the truth?

VLADIMIR PUTIN: It doesn’t want to.

First of all, the world is complex and diverse; some people see it, while others don’t want to see it and do not notice it. World media monopoly of our opponents allows them to behave as they do.

Moreover, I suppose that my somewhat careless comment during my visit to Hungary had some effect, when I said that it is disappointing to lose to yesterday’s miners and tractor drivers. It is unpleasant to lose to Russia as well, but it’s less humiliating somehow.

At the same time, we are aware of the statements made by Ukraine’s top officials, including high-ranking officials in the Ukrainian army. As the head of the General Staff said, “We are not fighting against the Russian army.” What else do you need?

But in general, all this is very bad: the attempts to justify defeat and attempts to blame it on Russia. The bad thing is that this is fanning the conflict between Ukraine and Russia, or an attempt to fan that conflict.

If – again, I’ve said it before and I’ll repeat it – if the Minsk agreements are implemented, I am confident that the situation will gradually return to normal. And I imagine that Europe is just as interested in implementing the Minsk agreements as Russia. Nobody needs a conflict on the periphery of Europe, especially an armed conflict.

VLADIMIR SOLOVYOV: Were you able to draw our European colleagues’ attention to the Nazi ideology that has gained favour in Kiev? Were they alarmed?

VLADIMIR PUTIN: They try not to notice it. But what I want to note is what appeared to me as their sincere desire to find compromises that would lead to a final settlement.

After all, if you paid attention to the Minsk Protocol, it talks about decentralisation of power, and then there is a footnote stating what this implies. The authors of this footnote are our German and French partners. This speaks to their sincere desire to find the compromises I just talked about.

VLADIMIR SOLOVYOV: Did the Minsk agreements allow you to revive the degree of trust you had earlier in your relations with the leaders of France and Germany?

VLADIMIR PUTIN: You know, absolute trust is something hard to achieve even in a family, and it is much harder to achieve on an international level. But I think we understand each other, and overall, trust each other. Although, of course, there remains a certain element of mistrust, but I nevertheless had the sense that our partners are generally more inclined to trust us than not – or in any case, believe in our sincerity.

VLADIMIR SOLOVYOV: Do you currently have working contacts with the President of Ukraine and do you trust that Mr Poroshenko will do what he tells you he will?

VLADIMIR PUTIN: We maintain contact. Sometimes, I’m just a bit surprised by the Ukrainian leadership’s public statements, for example, that members of our Presidential Executive Office participated in the tragic Maidan events a year ago. This is absolute, complete nonsense, so far from the truth that one even wonders where it came from. Sometimes, I later hear that these statements were based on inaccurate data from the special services – that is what I am sometimes told. I would ask to be more careful when using information that lands on my Ukrainian colleagues’ desks.

VLADIMIR SOLOVYOV: In the event of military escalation by Ukraine and national battalions, could Minsk 3 talks be held, or would Russia take extreme diplomatic measures such as recognising the Donetsk National Republic and Lugansk National Republic?

VLADIMIR PUTIN: For now, there is no need for any extreme measures because these Minsk agreements are not just a document formulated by four participants in the Minsk process, meaning Ukraine, Russia, France and Germany. They are enshrined in a United Nations Security Council resolution and have taken the form of an international legal act, essentially supported and approved by the entire international community. It’s a different story, as they say. And I very much expect that it will be implemented. And if it is implemented, then this is a reliable path toward normalising the situation in this part of Ukraine.