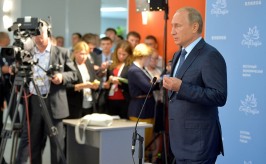 Question: Mr President, this trip has also taken you to Chita, and to China, where the main event was the anniversary of the end of World War II. How would you describe the situation with the results [of World War II] in light of your contacts with your colleagues, with veterans and others? Is the meaning and significance of these dates and events being diluted and eroded?

Vladimir Putin: I think we are all witnessing attempts to erode the importance of World War II and its events, and sadly, this is happening in Europe and in Asia too, where we can see similar tendencies. It is therefore very important for everyone who fought Nazism and militarism to uphold in humanity’s consciousness the true meaning of what took place in the fight against Nazism and militarism.

I think that in holding such large-scale events to mark this anniversary of the end of World War II, our Chinese friends are moving in precisely this direction, the right direction, and are maintaining among their people a correct understanding of the significance of the fight against these things. The real sense of all this is to only make sure that nothing like this ever happens again in human history.

For our part, we will continue to do all we can to make sure that the truth about the Great Patriotic War, the truth about those who fought for our independence and freedom and brought freedom to the peoples of Europe, will remain not only in our minds, but in the hearts of our people and people in other countries, too.

China held very large-scale events, and we sensed that not only the Chinese leadership, but also the people deeply cherish and preserve the memory of what their forebears did to free their homeland.

Question: On the subject of Ukraine, we know the events that took place yesterday at the Verkhovna Rada in Kiev, when law enforcement officers were killed and demonstrators clashed with police. This took place as the Parliament voted on amendments to the Constitution. How do you assess these events and what is your prognosis?

What we are seeing today is the next round of political confrontation in Ukraine, and the amendments to the Constitution are being used only as a pretext for intensifying the political battle for power.

Vladimir Putin: I remind you that in accordance with the Minsk Agreements, amendments were to be made to Ukraine’s Constitution, but this would be done through discussion, dialogue and coordination with the Donbass region and the unrecognised Donetsk People’s Republic and Lugansk People’s Republic. Unfortunately, the authorities in Kiev are not taking any such steps today and there is no dialogue and coordination on the amendments to Ukraine’s Constitution. This is of principle importance.

If we are talking about carrying out the Minsk Agreements, let me remind you that amendments to the Constitution must be discussed and settled with the Donbass region for a start, and second, the law on local government elections also needs to be settled with the Donbass region. Third, a law on amnesty is supposed to be passed, but this has not happened, and a law on special status for these regions is supposed to come into force. This law has been passed, but its entry into force has been postponed. These are four basic conditions for political settlement that our colleagues in Kiev have not implemented, unfortunately. They are simply not being carried out.

As for the tragic events that took place, I think this is not linked to amendments to the Constitution, because everything proposed today as amendments is purely declarative in nature and essentially changes nothing in the way state power in Ukraine is organised.

I will not go into the details now. You can talk with the experts. All of this is clear enough to see. Simply, what we are seeing today is the next round of political confrontation in Ukraine, and the amendments to the Constitution are being used only as a pretext for intensifying the political battle for power.

Question: What do you think will happen from here?

Vladimir Putin: That will depend not on us but on Ukraine itself, on the Ukrainian people and how long they are prepared to put up with this chaos.

I have already said that the fact that Ukraine has been placed under outside governance and foreigners hold all the key posts in the Government and now in key regions too is, I think, an insult to the Ukrainian people.

Are there really no decent, honest and competent managers in Ukraine? Of course, there are. I repeat; it does not depend on us. The way events develop in Ukraine depends on Ukraine itself and on the Ukrainian people.

Question: In the past few days, the refugee crisis has reached a critical point in Europe. The situation is very tense. What is your assessment of this situation, why do you think it is happening? What do you think will happen next?

Vladimir Putin: We talked about this on numerous occasions a long time ago. I believe this is an absolutely expected crisis. If you remember, or look it up in your archives, we in Russia, yours truly in particular, said a few years ago that we are in for large-scale problems if our so-called western partners continue with their misguided foreign policy, as I always referred to it, especially in Muslin regions, in the Middle East, North Africa – the policy they are actually still conducting.

What is this policy? That of imposing their standards without taking into consideration the history, religion, culture or national characteristics of these regions. This is, primarily, the policy conducted by our American partners; Europe blindly follows the lead, complying with its so-called allied commitments, and then it bears the brunt.

Together, and I would like to stress this word, together we need to combat terrorism and extremism of all sorts, primarily in the problem countries.
I am surprised to see certain American media outlets criticising Europe for its excessively tough, as they say, attitude to migrants. However, the United States does not have to deal with such a flow of migrants, while Europe, after it blindly followed instructions from America is now bearing the brunt of the crisis.

I am not saying this to say how smart we are and how shortsighted our partners turned out to be, or to bait anyone; we simply need to see what to do next. What is it? The answer is very simple.

First, together, and I would like to stress this word, together we need to combat terrorism and extremism of all sorts, primarily in the problem countries, to resolve this issue – without that any further progress is impossible. How can we make any progress in regions controlled by the Islamic State? It is impossible, people are fleeing those regions, they kill hundreds of thousands, blow up cultural monuments, burn people alive or drown them, cut the heads off living people. How can one live there? Of course, people are fleeing.

First, we must efficiently combat terrorism and extremism together.

Second, we need to restore the economy of those countries and their social sphere. Only this way, by showing respect for the history, traditions and religion of these peoples and countries, we can restore their statehood and provide large-scale economic and political support.

If we join our efforts in all these areas, we will have positive results. If we act separately and keep arguing among ourselves over some quasi-democratic principles and procedures on certain territories, this will get us into a greater deadlock. However, I pin my hopes on a positive development and on joining efforts with all our partners.

Question: Mr President, I would like to clarify something with regard to the Islamic State, because Russia has been speaking of the need to create a political coalition, and the United States has been urging the same thing. There is no agreement on Syria, for example, and so forth. How do you see the creation of such a coalition?

Vladimir Putin: We are taking specific steps, and doing this publicly. If you want to know the details, I can explain once again. It is true that we want to create an international coalition to combat terrorism and extremism. With this aim in view, we are holding consultations with our American partners, I personally discussed this over the telephone with the President of the United Stated, Mr Obama, and I also discussed this with the President of Turkey, the leaders of Saudi Arabia, with the King of Jordan, the President of Egypt and other partners. Our military agencies are in close contact, only recently the heads of the general staffs of the countries neighbouring on these conflicts met in Moscow.

We continue our political efforts to create a certain coalition. If today it is impossible to organise joint work directly ‘on the battlefield’, so to speak, involving all the countries interested in combatting terrorism, we should at least achieve certain coordination between them. We are trying and making certain efforts in this direction. Our first steps show that overall this seems possible.

We know that there are different positions on the developments in Syria. Incidentally, people are not fleeing from the Bashar Assad regime – they are fleeing from the Islamic State, which has occupied vast territories in Syria and Iraq and is committing atrocities there. That is what people are running away from. However, we understand that political change is also required. We are also working with our partners in Syria.

It is true that we want to create an international coalition to combat terrorism and extremism.
There is an overall understanding that such joint efforts to combat terrorism should go side by side with certain political processes inside Syria. The Syrian President agrees with this too, including, say, holding early parliamentary elections and establishing ties with the so-called ‘healthy opposition’ and involving them in running the country. This is primarily a matter of Syria’s internal development. We are not imposing anything, but we are ready to assist in an internal Syrian dialogue.

Question: Mr President, just to clarify: is Russia ready to take part in a military operation if the coalition does take shape? Particularly since we have a certain moral responsibility – there are Russians within the Islamic State. Some media are already saying that our aviation is being deployed in the area.

Vladimir Putin: You know, this is a separate issue and we see what is going on. Say, the American aviation is making certain strikes. So far, their efficiency has not been very high, but it is too early to say that we are ready to do it. However, we are providing Syria with significant support anyway, both in equipment and armaments and in personnel training.

We signed major contracts with Syria some 5–7 years ago, and we are complying with them in full. Therefore, we are considering various scenarios, but so far, what you have mentioned is not on our agenda. However, we will continue our consultations both with our friends in Syria and with the countries in the region. I have already told you who we are having an exchange with on this matter, and the parties we are in dialogue with.