President Vladimir Putin on the situation in Syria 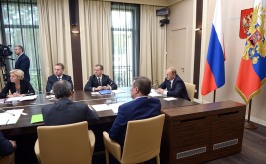 Excerpts from the introductory remarks of the President of the Russian Federation at the meeting with Government members, 30 September 2015

Syria is the issue here. The only real way to fight international terrorism (and international terrorist groups are creating chaos in Syria and the territory of neighbouring countries right now) is to take the initiative and fight and destroy the terrorists in the territory they have already captured rather than waiting for them to arrive on our soil.

We all know that thousands of people from European countries, Russia, and the post-Soviet region have joined the ranks of the so-called Islamic State, a terrorist organisation that – I want to stress again – has nothing to do with genuine Islam. There is no need to be an expert to realise that if they succeed in Syria, they will inevitably return to their own countries, and this includes Russia.

We all know too that the Islamic State long since declared our country its enemy. Today, a number of countries, including the United States, Australia and France, are using their air forces to carry out air strikes against the Islamic State’s positions in Syria.

We have always consistently supported the fight against international terrorism. At the same time, we believe that it must proceed strictly in accordance with international law, in other words, on the basis of UN Security Council resolutions or at the request of the country in need of military assistance. Our partners’ operations in Syria have neither of these things as their basis, but we nonetheless think it possible and necessary to unite the efforts of all concerned countries in the fight against international terrorism and base this common effort on the UN Charter.

At this stage, I propose that all countries concerned, in particular the countries in the region, start taking part in the work of the international information and eventually coordination centre in Bagdad.

The only real way to fight international terrorism is to take the initiative and fight and destroy the terrorists in the territory they have already captured rather than waiting for them to arrive on our soil.

We have informed all of our partners about Russia’s plans and actions in Syria. Let me repeat: Russia’s involvement in the anti-terrorist operations in Syria is in accordance with international law and based on the official request from the President of the Syrian Arab Republic.

I want to stress the point though that the conflict in Syria has deep roots and is the result of many factors. This includes interstate and domestic political factors, and religious and interethnic differences, which have been exacerbated by unceremonious foreign intervention in the region’s affairs.

Given these circumstances, we naturally have no intention of getting deeply entangled in this conflict. We will act strictly in accordance with our set mission. First, we will support the Syrian army only in its lawful fight against terrorist groups. Second, our support will be limited to airstrikes and will not involve ground operations. Third, our support will have a limited timeframe and will continue only while the Syrian army conducts its anti-terrorist offensive.

Our view is that a final and long-term solution to the situation in Syria is possible only on the basis of political reform and dialogue between all healthy forces in the country. I know that President al-Assad knows this and is ready for this process. We are counting on his active and flexible position and his readiness to make compromises for the sake of his country and people.