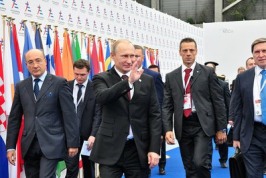 President of Russia Vladimir Putin took part in a working session of the Asia-Europe (ASEM) Summit, where he addressed the session Enhancing Dialogue and Cooperation between Europe and Asia and Future Direction of ASEM.

The Russian President said in his address that regional cooperation is the only alternative to current negative trends and some countries’ desire to decide of their own accord the fate of other countries and entire regions.

Mr Putin told summit participants about the positive experience gained within the Customs Union and Eurasian Economic Union and spoke about the positive development in organisations such as the BRICS Group, the Shanghai Cooperation Organisation and other regional associations in which Russia is actively involved.

The President also expressed his regret at the growing potential for conflict in the Eurasian region and said that this would lead to the collapse of entire regions and have very serious consequences for many countries.

The President met, in particular, with Japanese Prime Minister Shinzo Abe, with whom he discussed the situation in Ukraine. Mr Putin and Mr Abe confirmed their readiness to hold another bilateral meeting at the APEC Summit in Beijing.

The Russian leader also met with President of the European Commission Jose Manuel Barroso. Mr Putin and Mr Barroso made a brief review of their cooperation and its results, and agreed to continue their contacts after Mr Barroso steps down from his post following a planned rotation.

Mr Putin had a brief conversation with Australian Foreign Minister Julie Bishop, with whom he discussed details of his participation in the upcoming G20 Summit in Brisbane.

The President also met with President of Romania Traian Basescu, with whom he briefly discussed the main aspects of bilateral relations.

In addition, the President of Russia met with the secretary of Italy’s Lega Nord political party, Matteo Salvini.