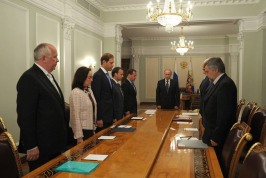 You know that a terrible tragedy occurred over Ukraine today: a passenger plane went down. According to the initial data, it was carrying 285 people.

In the name of the Russian leadership and the Government of the Russian Federation, we express our condolences to all the victims’ families and the governments of the nations whose citizens were on that plane. Let us honour their memory.

In this regard, I would like to note that this tragedy would not have occurred if there were peace in that country, or in any case, if hostilities had not resumed in southeast Ukraine. And certainly, the government over whose territory it occurred is responsible for this terrible tragedy.

I gave corresponding instructions to military departments to provide all necessary assistance in investigating this crime. And I am also asking the Government of the Russian Federation to use our civilian departments as much as it can to do everything to thoroughly investigate this event. We will do everything – everything that we can, at least – to ensure that an objective understanding of what happened becomes available to the Russian public, to the public in Ukraine and throughout the world. These are absolutely unacceptable things and nobody has the right to pass them by without making corresponding conclusions and ensuring that we all have objective information about what happened.

But we have gathered today for a different purpose. I would like to talk to you about the socioeconomic situation in our country. We have many other current topics to discuss, so let’s begin.