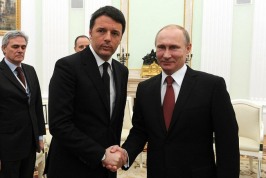 President of Russia Vladimir Putin met in the Kremlin with Prime Minister of Italy Matteo Renzi, who was in Russia on a working visit.

The two leaders discussed prospects for further development of bilateral cooperation in trade, the economy, investment, and in cultural and humanitarian spheres. They also exchanged views on international issues.

After a brief ‘one-on-one’ meeting the talks continued in expanded format.

Vladimir Putin and Matteo Renzi also made statements to the press.

Russian-Italian relations rest on the rich traditions of long-term friendship and mutual respect. Italy is one of Russia’s most important partners in European affairs and in resolving pressing international issues.

Today’s talks with Prime Minister Renzi took place in an atmosphere of goodwill and constructive dialogue, typical for Russian-Italian relations. Our conversation was very useful and timely, given the current situation in Europe and the world at large.

We discussed the state of our bilateral relations and of relations between Russia and the European Union. We spoke for their further development, which would meet the interests of Russia and the EU member states.

We, of course, exchanged views on the Ukrainian crisis. Mr Prime Minister expressed his position regarding this matter and made some valuable proposals regarding what could be done to achieve a settlement. The situation there, as we all know, remains complicated. At least combat action has been stopped, people are not dying and towns are not being destroyed.

We agreed that the conflicting parties should strictly abide by the agreements achieved in Minsk on February 12. I am certain that this opens up opportunities for an overall peaceful settlement and, of course, for establishing direct dialogue between Kiev, Donetsk and Lugansk.

Currently, the role of all responsible members of the international community is growing, especially of those who have a noticeable influence on the Ukrainian authorities. Here we also rely on our Italian partners, both as a nation and as a key member of the European Union.

We had a detailed discussion of the terrorist threat coming from the Middle East and North Africa, particularly the sharp deterioration of the situation in direct proximity to Italy – in Libya. Russia stands for a peaceful settlement of the Libyan crisis and supports the mediatory efforts of the UN in this direction.

As I have said, in the course of our talks we considered key issues of bilateral relations. We discussed an entire range of measures to step up our cooperation so we could not only maintain, but also enhance the positive trends and positive potential we have accumulated over the years, over many decades. Russia advocates the further operation of international cooperation mechanisms.

We, naturally, had an exchange of opinions on pressing issues of bilateral trade and economic relations. Incidentally, only recently, on March 2, a round table discussion involving CEOs of major Russian and Italian companies took place in Milan. Our Minister of Economic Development, Mr Ulyukayev, headed the Russian delegation.

Despite the 10 percent reduction in our trade turnover last year, caused by obvious reasons, Italy remains Russia’s leading foreign trade partner. Italian capital investment in Russia exceeds $1.1 billion, while Russian capital investment in Italy is over $2.3 billion. To further increase these figures, the Russian Direct Investment Fund together with their Italian partners is creating a joint fund worth $1 billion.

One of the most advanced spheres of our cooperation is the power industry. The Italian company Enel has made significant investments into Russian electrical energy facilities. Russia’s Rosneft and LUKOIL, in their turn, own assets in Italian oil refineries. It is important that we thus complement the traditional ‘seller-buyer’ relationship, as Italy is a major consumer of Russian natural gas.

We are also making progress in terms of mutual investment in such high technology industries as the aircraft industry, space exploration and nuclear technology. The Russian company Sukhoi and their Italian partners joined efforts to promote the Superjet-100 in the global market. About 150 craft have already been ordered.

Another promising project is the production at a facility outside Moscow of Agusta helicopters. Most of the orders come from Russia.

We gave a lot of attention to plans to build a joint thermonuclear experimental reactor, to develop civil rocket technology and satellite systems.

I am certain that contacts during the EXPO 2015 Milano would also help enhance business cooperation between Russia and Italy.

Our multi-faceted humanitarian contacts are also developing. They are based on mutual interest in culture and history and a large-scale tourist exchange. More than 900 thousand Russian citizens visited Italy last year. Incidentally, Russian tourists spend about $1 billion in Italy.

Both countries have successfully held reciprocal Years of Tourism. The itinerary included a tour of Italy by the Academic Maly Theatre, concerts by the Russian National Orchestra and many other events.

Overall, Mr Prime Minister and I have agreed that our countries have great opportunities for further expansion of mutually beneficial cooperation.

Once again, I would like to thank our Italian colleagues for this substantive and fruitful exchange.