Permanent Representative of Russia to the EU Vladimir Chizhov meets the Ambassador of Philippines in Brussels Eduardo José A. de Vega 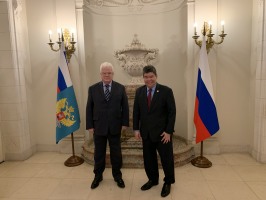 During the meeting they discussed the state of relations of the two countries with the EU, cooperation between Russia and ASEAN, including the perspective of enhanced contacts between the Permanent Mission of Russia to the EU and the ASEAN Brussels Committee chaired by Ambassador Eduardo José A. de Vega.