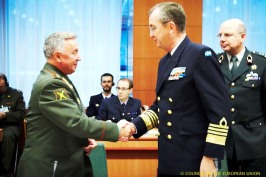 On 27 October 2010, the Chief of General Staff of the Russian Armed Forces, Army General Nikolay E. MAKAROV participated in the informal part of the EU Military Committee meeting at Chiefs of Defence level. At the invitation of the Chairman of the EU Military Committee General H.Syren, he addressed the participants with information regarding the ongoing reform of the Russian Armed Forces and outlined possible ways of cooperation between the Russian Federation and the European Union in the military area.

In his presentation, Army General N.Makarov underlined that the aim of ongoing reform was to create compact and highly mobile Armеd Forces, equipped with modern armament and staffed by professionals. They should be capable to wage classic wars, as well as to conduct innovated forms of operations including in the framework of combating international terrorism and piracy.

The Russian Chief of General Staff also emphasized that Russia-EU cooperation in the military area contributed to the development of confidence and promoted the strengthening of the European security. Army General N.Makarov called upon his colleagues from the European Union countries to take a systemic and gradual approach towards further development of collaboration. At the same time, he suggested that practical cooperation in the military field between Russia and the EU should continue. This work is to be facilitated by a joint Russia-EU working group of experts (staff-to-staff talks), the creation of which had been agreed upon during the visit of General H.Syren to Moscow in September, 2010.