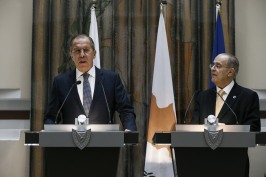 Foreign Minister Sergey Lavrov’s remarks and answers to media questions at a news conference following talks with Foreign Minister of the Republic of Cyprus Ioannis Kasoulides. Nicosia, May 18, 2017

We have held very useful talks. Cyprus is our reliable and time-tested partner in Europe. Our ties are based on sincere feelings of friendship and the sympathies of our peoples, on their spiritual and cultural affinity.

We examined the state of our bilateral affairs. We are satisfied with our intensive and result-oriented political dialogue. We noted that after a major setback in bilateral trade for well-known reasons, there has been a trend toward growth in trade in recent months. We discussed contacts between our foreign ministries, our joint work at international organisations. We considered the educational and humanitarian exchanges that are extremely robust and attract large numbers of Russian and Cypriot participants.

As regards international issues, we considered them, above all, in light of common threats to all countries. The challenges posed by international terrorism certainly call for a unifying agenda, rather than the continuation of the confrontational policy that we are witnessing on the part of some Western countries. The fight against terrorism is linked to the need to resolve conflicts in the Middle East and North Africa, above all, in Syria. We informed our Cypriot friends about the efforts being taken by Russia both within the Geneva format and in Astana in cooperation with Turkey and Iran and with the participation of observers from the United States, the United Nations and Jordan.

We also exchanged views on the situation in Ukraine. Here, as the Minister said, we share the same position. It is necessary to thoroughly and fully implement the Minsk Agreements. Unfortunately, the latest actions by the Ukrainian authorities show that Kiev is either unwilling or unable do its part. Those actions indicate that the authorities are under extremely heavy pressure from the most radical forces in society. I mean attacks on the languages of ethnic minorities living in Ukraine, the blocking of mass media and internet resources, attacks on the Church and attempts by the government to interfere in its affairs. We both reaffirmed our support for OSCE efforts to organise work to advance the implementation of the Minsk Agreements within the framework of the Contact Group and the Special Monitoring Mission to Ukraine.

Russia reiterated its commitment to a just settlement of the Cypriot problem. We support a lasting, viable and comprehensive settlement based on UN Security Council resolutions and agreements between both Cypriot communities.

We touched on the current state of affairs in relations between Russia and the European Union, which is unsatisfactory. We are interested in getting our dialogue back onto a normal, equal and mutually respectful track. For that, of course, it is necessary that Brussels stop playing a one-sided game. Over the past one and a half years, we passed on to the European Commission, including through Russian President Vladimir Putin, our informal ideas on what could be done to smooth our relations and how to establish contacts between the Eurasian Economic Commission (EEC) and the European Commission (EC). As before, we will be ready to discuss a response to those documents. There has been none so far.

We expressed our gratitude to our Cypriot friends that they are part of the group of EU countries that are calling for the current abnormal situation to be overcome.

Question (via interpreter): The Turkish side insists on tying energy development in Cyprus with negotiations to settle the conflict on the island. Some people think this may lead to a confrontation because the Republic of Cyprus is not going to put off its energy development programme. I would like to know Moscow’s view on this situation. How can Russia contribute to enhancing stability in this region which is already facing problems?

Sergey Lavrov: We can only reiterate that all disputes must be resolved within a legal framework by seeking the consent of the parties involved. This fully applies to the situation you have just mentioned. Of course, we think that in this, just like in any other situation, it is essential to refrain from threatening to use force, not to mention actually using force. We hope that all the parties involved will be guided by this.

Question: Ahead of US President Donald Trump’s first foreign tour his advisers have said that Washington is considering an initiative to create an alliance of Persian Gulf nations similar to NATO. What is your assessment of the prospects of such an initiative for security in the region?

Sergey Lavrov:  You are aware of our generally negative attitude towards settling any issues of international security via narrow and closed military political blocs. The media now abounds in speculation regarding US President Donald Trump’s upcoming talks in the Middle East. We prefer to wait and see what happens. Then there will be more clarity about what is going on. It is our principled stance that the extremely complicated problems of the Middle East and North Africa can only be solved on a collective and inclusive basis with the involvement of all the so-called “actors”, without trying to isolate anyone. Of course, it is crucial to avoid “driving wedges” of an ethnic or religious nature into the relations between the regional nations.

Question (via interpreter): I would like to hear your opinion on the recent controversy surrounding reports that the US President passed classified information to Russian officials. It was said to be “wholly appropriate.”  Some people say it is better to share information on fighting international terrorism. You yourself said that we should cooperate more. Will the information that was passed along save Russian lives?

Sergey Lavrov: Russian President Vladimir Putin spoke about that in detail at a news conference following his talks in Sochi yesterday. Since you raised the issue again, I can say the following. I sometimes get the impression that many US media outlets work according to a principle which was common in the Soviet Union. Back then people used to joke that the newspaper Pravda [Truth] had no news in it, and the Izvestia [News] paper has no truth in it. I get the impression that many US media operate in the same way.

Regarding the substance of the issue, we do not comment on rumours. We read in your newspapers that the main accusations are centred on the following: allegedly, secrets were divulged regarding terrorists’ ability to put “undetectable” explosives into computers, laptops, iPads and so on. If memory serves, maybe one or two months earlier, the Trump administration instituted a laptop ban for passengers from seven Middle Eastern countries, if I am not mistaken, which was directly connected to a terrorist threat. So if you are talking about that, I don’t see what the secret is.