Negotiations between Russia and Europol 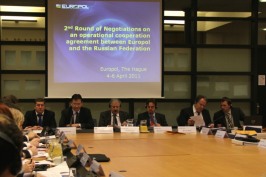 The second round of negotiations on a draft Agreement on operational co-operation between Russia and Europol was held in The Hague on 4-6 April 2011. The Russian delegation comprised representatives from the Ministries of Interior, Justice, Foreign Affairs, Federal Security and Drug Control Services and other agencies. The Europol was represented by experts from units on legal affairs, data protection and information security.

The talks marked substantial progress on the text of the draft Agreement. Both parties reiterated their commitment to its prompt conclusion, which will allow to enhance law-enforcement cooperation between Russia and Europol in the areas of combating terrorism and transnational organised crime.

The next round is to be organized in June 2011 in The Hague.