The Munich conspiracy and peace in our time 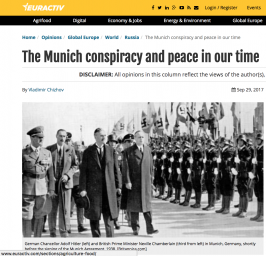 “Those who do not remember the past are condemned to repeat it”, the expression goes. On 29 September 1938 Great Britain, France, Nazi Germany and Fascist Italy made a deal to partition Czechoslovakia, in what politely became known as the Munich agreement. Faced with insurmountable Franco-British diplomatic pressure Prague was forced to give in to the German ultimatum, effectively committing an act of national suicide. Hours later, simultaneously with the German offensive, and acting upon secret arrangements with Berlin, Polish forces seized the Czechoslovakian region of Těšín. Within six months the Nazis had subdued what was left of the country, within a year the Second World War was underway.

The Munich prelude to the bloodiest chapter of the 20th century should give us pause for thought. Indeed, but for one issue of common concern, the political systems and geopolitical interests of the key players in Munich were far from aligned. What proved decisive to overriding those differences was the shared apprehension of the looming “threat from the East”, whipped up by a powerful campaign of propaganda (or, as it has become known of late, “strategic communications”). London in particular was obsessed with the perceived ideological challenge from communism, while strategically underestimating the continental ambitions of the Third Reich. As archives clearly show, in order to redirect Nazi militarism away from their borders and towards the Soviet Union, the victors of World War I proved ready to make cynical sacrifices and collude with Hitler. Also, by appeasing Hitler’s appetite in Europe, the British and French colonial powers hoped to prevent an attempt to reclaim former German colonies lost after WW I.

The rational alternative, surely, could have been the creation of a genuine European system of collective security – to reinforce the increasingly hollowed out League of Nations and ensure a continental balance of power. Yet Soviet calls from 1935 onward to establish just such a system fell on deaf ears. Moreover, when in March 1938 the USSR signaled its readiness to undertake joint actions “to halt the further escalation of aggression and avert the mounting danger of world carnage”, France delayed and ultimately reneged on its commitments to assist Czechoslovakia. Meanwhile Poland prevented Soviet forces from transiting its territory en route to the country. None of the actors in Munich, however, had any reservations about concluding non-aggression agreements with Nazi Germany - a year prior to a similar and widely publicized pact between Berlin and Moscow.

Historians cite numerous reasons for the hostilities and mayhem that followed. However, with the gift of hindsight, would it be an exaggeration to claim that key among those reasons was the readiness of some to ensure their own security at the expense of the security of others? Or their belief that man-hating ideologies could be harnessed (and rewarded) to serve their naked geopolitical interest? In both cases security proved elusive. By driving away potential allies the “peacemakers” in Munich encouraged the heavily-armed belligerent to pick them off one by one on the battlefield.

Decades onwards, it would seem unjust to dismiss the hard-earned lessons of the past. 21st century Europe deserves more than revamped geopolitical “sanitary cordons”, military buildups and media-induced fears about a mythical Russian threat. Future generations will not be kind to us if we divide our forces in the battle against the scourge of terrorism and other real cross-border challenges. Rallying around a joint vision of a shared continent from Lisbon to Vladivostok would be an enterprise more worthy of Europe’s zeal and ambition.

Nor, in my view, is it wise to attempt to rewrite history by artificially redirecting blame for tragedies of the past. Our historical heritage is a prized asset, shielding us from political egoism and future conflict, which should not be traded away for historical fantasies. Those who think otherwise would be following in the footsteps of their hapless predecessors in Munich.