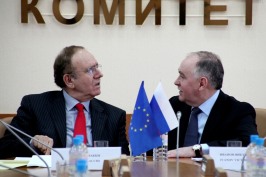 On 14 February 2011 Mr. Pino Arlacchi, Member of the European Parliament, took part in the meeting of the Inter-Agency Group on Afghanistan of the State Anti-Drug Committee of Russia that was held at the headquarters of the Federal Service of the Russian Federation for Narcotics Traffic Control (FDCS). The meeting was chaired by Mr. Viktor Ivanov, Chairman of the State Anti-Drug Committee, Director of the FDCS.

Participants discussed ways to strengthen cooperation between Russia and the EU in combating the drug threat from Afghanistan. The importance of this issue can be illustrated by the fact that annually 548 tons and 711 tons of drugs in opium equivalent illegally enter Russia and EU Member States respectively.

Mr. Pino Arlacchi, whose report on a new strategy for Afghanistan was approved by the European Parliament in November 2010, emphasized in his address the need to reinforce joint efforts of the European Union and Russia in the fight of the world community for elimination of Afghan drug production.

The Russian side drew particular attention to the «Rainbow-2» plan for the elimination of Afghan drug production that contains the following seven items:

1. Raising through the UN Security Council the status of the problem of Afghan drug production to that of threat to international peace and security.

2. Elaborating and implementing the programme of Afghan economic development through creating infrastructure, primarily for the energy and electricity industries, as well as creating a sufficient number (at least 2 million) of jobs for Afghans.

3. Eliminating the cultivation of opium poppy through the eradication of crops by well-tested methods and raising the efficiency from 3 to not less than 25%.

4. Introducing into the UN Sanctions List those landlords who provide their land for growing poppy. Organizing for this purpose a special cadastre registration of the territory of Afghanistan’s southern provinces.

5. Introducing into the ISAF mandate the competence and obligation to eradicate opium poppy crops in Afghanistan.

6. Providing the necessary level of trust in order to develop operative collaboration, intelligence data exchange, including information on drug laboratory locations and precursor supplies, as well as transfer of objects of surveillance, etc.