Minister Lavrov meets the Association of European Business in Russia 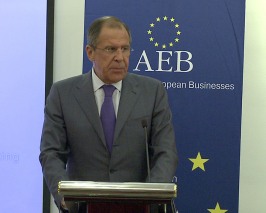 On 8 October Minister of Foreign Affairs of the Russian Federation Sergey Lavrov held a meeting with the Association of European Business in Russia (AEB). In his statement Minister gave evaluation to the current state of Russia-EU relations having focused on most relevant areas of cooperation development, including in the context of Russia’s WTO membership and the Eurasian integration processes. Minister Lavrov stressed the high potential of participation of Russian and EU business communities in developing the partnership between Russia and the EU and making it more substantial. After the speech, Minister took some questions from the audience.

The meeting moderated by Chairman of the AEB Board Reiner Hartmann and Director-General of the AEB Frank Schauff was held in an open and business atmosphere.