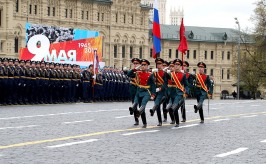 Vladimir Putin attended the military parade to mark the 72nd anniversary of Victory in the 1941–1945 Great Patriotic War.

Defence Minister General of the Army Sergei Shoigu inspected the troops during the military parade.

Commander-in-Chief of the Russian Land Forces Colonel General Oleg Salyukov was in command of the parade.

Over 10,000 personnel and 114 units of military equipment took part in the parade.

The parade was traditionally opened by the drummer company of the Moscow Military Music School.

The music was provided for by the combined military band of the Moscow Garrison headed by Distinguished Artist of Russia Colonel Timofei Mayakin.

I congratulate you on Victory Day. Happy holiday, a holiday whose significance was earned by the people themselves with their unparalleled feat of liberating our Fatherland and their heroic and decisive contribution to the defeat of Nazism.

The triumphant victory over that terrible totalitarian force will forever remain in the history of humankind as a supreme triumph of life and reason over death and barbarity.

It is our duty to remember that the victory was achieved at the cost on irreparable sacrifices, that the war claimed millions of lives. This monstrous tragedy was made possible primarily due to connivance to the criminal ideology of racial superiority and due to the lack of unity among the world’s leading nations. This allowed the Nazis to arrogate the right to decide the destiny of other peoples, to unleash the cruellest, bloodiest war, to enslave nearly all European nations and make them serve their murderous goals.

The Soviet Union faced the most powerful assaults by the Nazis.

But there was not, there is not and there will never be a power that could defeat our people.

They fought to the bitter end defending the homeland, and achieved the seemingly impossible by turning around the bloody wheel of World War II, and drove the enemy back to its home whence it dared to invade our land, crushed Nazism and put an end to its atrocities.

We will never forget that it was our fathers, grandfathers and great-grandfathers who won back Europe’s freedom and the long-awaited peace.

The Great Victory was won by marshals and privates, volunteers and home front workers, partisans and the fighters of the underground. Old people and children. People of all ethnicities and trades. They all passed through the unthinkable ordeals of World War II with courage and unrivalled patience.

Without sleep or rest, they worked at the plants and in hospitals, they burnt in tanks, froze in trenches, drowned at river crossings, shielded their comrades in arms. They rushed into attacks realising that the battle could be their last one. They died without learning of the Victory yet they did all they could to bring it closer.

Today, we bow our heads to cherish the memory of those who did not come back from the war, in memory of the sons, daughters, fathers, mothers, grandfathers and great-grandfathers, husbands, wives, sisters, fellow soldiers, family members and friends. We mourn the veterans who are already gone.

I ask for a minute of silence.

(A minute of silence)

We celebrate Victory Day in each family across our huge country. No family was spared by the war. And we begin by honouring our veterans. We do it without hiding our tears and without shunning high-sounding words. They come from our hearts filled with respect and gratitude.

We feel a kinship and a piercing closeness to the generation of heroes and victors, and when addressing them, I will say: You will never feel ashamed of us.

A Russian soldier is ready today as ever for any sacrifice for his Motherland, for his people, showing courage and heroism.

Such warriors, soldiers and officers are here now, standing in the parade formations on Moscow’s Red Square. The country is proud of you!

We will always cherish Russia as you, the Soldiers of Victory, did, and we will strengthen the traditions of patriotism and committed service to the Fatherland.

The lessons of the past war call on us to be vigilant. And the Russian Armed Forces are ready to counter any potential aggression.

Life itself demands from us that we must increase our defence potential. However, the consolidation of the world community is needed for an effective fight against terrorism, extremism, neo-Nazism and other threats.

We are open to such cooperation. Russia will always side with the forces of peace, with those who opt for equal partnership, who reject wars as contrary to the very essence of life and the nature of man.

We must do this so that our descendants should love Russia as much, and the people’s memory should forever cherish the generation that selflessly fought for its Motherland and protected its freedom and independence with honour.

Glory to the victorious people!