MEP Jiří Maštálka was awarded the Order of Friendship 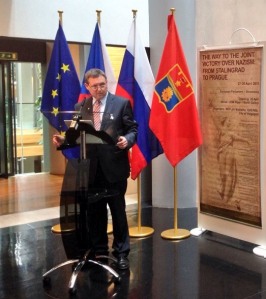 Jiří Maštálka has been a Member of the European Parliament since 2004. He is presently Vice-Chair of the European Parliament Delegation to the EU-Russia Parliamentary Cooperation Committee. His activities contribute significantly to the development of partnership relations between Russia and the European Union.
Being alumnus of the Volgograd State Medical University, Jiří Maštálka is actively promoting cooperation of the city of Volgograd with regions of European states. His efforts to preserve historical memory of World War II are highly commendable.

Jiří Maštálka was personally involved in organising two exhibitions in the European Parliament devoted to victory in the Great Patriotic War (1941-1945): “Volgograd: 70 Years of International Cooperation since the Battle of Stalingrad” (June 2013), “The Way to the Joint Victory over Nazism: From Stalingrad to Prague” (April 2015).

The Permanent Mission of the Russian Federation to the European Union joins in congratulating Jiří Maštálka and wishes him good health, agility and energy, new professional and creative achievements in the interests of further strengthening mutual understanding between Russia and the EU.