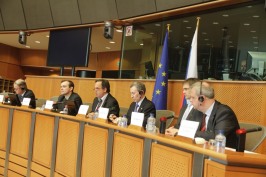 A meeting of the Working Group of the Russia-EU Parliamentary Cooperation Committee (PCC) was held in Brussels on 21-22 March 2011. Members of the State Duma and Federation Council of the Federal Assembly of the Russian Federation, members of the European Parliament, Deputy Permanent Representative of the Russian Federation to the European Union Nikolay Kobrinets, Director of the European External Action Service Gunnar Wiegand and other representatives of the EU executive services took part. Russian and EU policy towards other European countries, Russia-EU cooperation in the Baltic and Black Sea regions as well as Russian and EU approaches towards Northern Africa were adressed. An interesting and lively discussion took place on these issues.

The next meeting of the PCC Working Group, devoted to rural development, science, research and protection of environment, is scheduled for April 2011 in Astrakhan.