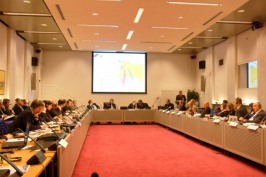 On 24-25 January a meeting of heads of operational police units of EU Member States and Russia was held at Europol Headquarters in the Hague. The Russian delegation was led by Mr. A.Prokopchuk, Chief of National Contact Point for Europol. It included representatives of the Ministry of Interior, Federal Drugs Control Service and Permanent Mission of the Russian Federation to the EU. The delegation of the European Union, led by Mr. R.Wainwright, Europol Director, was comprised of representatives of Europol, the European Commission, General Secretariat of the EU Council and law enforcement agencies of all Member States.

The participants exchanged information and best practices in fighting organized crime. Particular attention was given to the most dangerous forms of criminal activities which require close police cooperation of Russia and the EU. These include economic and financial crimes, legalization of crime proceeds, drugs trafficking, high-tech crimes, trafficking in human beings, smuggling of weapons and ammunition.

The meeting provided a good opportunity for discussing strategic and practical aspects of Russia-EU cooperation in combating transnational organized crime, including on-going joint operations, and for coordination of further steps towards expansion of cooperation.